Unite representative Walter Cullen hit out at accusations that the peaceful protest had descended into anarchy. "These workers feel passionately about their jobs as something more than filling a shift," he said. "They have conducted themselves throughout with dignity and respect for the property. Those who are concerned about the image of Ireland might look more to the events surrounding some of our financial institutions rather than events in the south east as a cause for greater concern."
.............................
The workers have also taken their protest to the Dublin headquarters of the receiver Deloitte & Touche. Here's a report of what happened there earlier today from the Irish Times. 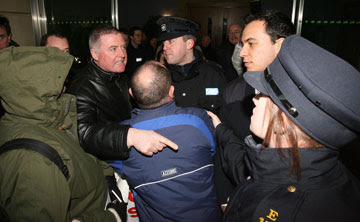 About 12 Waterford Wedgwood workers entered the reception area of Deloitte & Touche’s headquarters on Earlsfort Terrace in protest at the actions of Deloitte partner David Carson, who was appointed as a receiver to the ailing glassware company last month.

Union Unite, which represents the workers, said today’s protest was designed bring to the attention of those 1,100 people who work for Deloitte in Ireland the poor manner in which Mr Carson and their company have handled the situation in Waterford Crystal since last Friday.
When the workers first entered the Deloitte building at 11am this morning they were told by security personnel to leave and that they were trespassing.

At one stage gardaí were called to remove the protesters but following a meeting between two Waterford workers and senior partners at Deloitte, at which the workers registered their dismay at the actions of Mr Carson, the protest ended.

Waterford worker Tom Hogan said the protesters represented a cross section of the workforce and had come up to Dublin to make a protest and “to say we are not human waste that can be set aside when we are surplus to requirements."

Speaking after the meeting with senior partners Pat Cullen and David Deasy at Deloitte, Mr Hogan said: “We left them in no doubt as to how we feel about the actions of their partner David Carson in dumping 480 people.

“We put it to them that Deloitte is interested in one thing only, making it [Waterford Crystal] as attractive as possible to who they sell it to and to increase their own fee.

“They have absolutely no concern for individuals or families that are suffering as a result of this. We’ve made our protest here today we’ll be returning to Waterford now to join our colleagues in the factory to continue the occupation.

“We emphasised to them we won’t be going away anywhere soon…we are in for the long haul.
“If no prospective buyer turns up we expect this Government to take this into public ownership on behalf of the people of the south east region and of the country.”

More than 700 workers were employed at the plant until Friday, 480 of them in manufacturing.

Workers staging the sit-in have been operating a rota system with up to 100 people remaining in the plant at any given time.

In a statement before the protest, Unite regional organiser Walter Cullen said “It will be a peaceful demonstration. We will not be employing private security forces to ‘protect’ us as the receiver shamefully did in Waterford.”

“The sit in at Waterford was a direct result of David Carson’s action in closing the plant with no discussion, no contact or no respect for the working people who generated sales of €180 million for the company in the United States alone last year.

“Maintaining the plant as a going concern is essential to keep hope alive in the bids that have been made. If Deloitte is not willing to do that then we will,” he said

Meanwhile government Minister Martin Cullen who visited the plant as a flack runner to show (or pretend) that the government was "doing" something was challenged during his visit. Here is the story, Once more from the Irish Times.

About 150 workers gathered at the showroom yesterday, the fourth day of the occupation, while some challenged Minister for Arts, Sport and Tourism Martin Cullen who was there in relation to the issue. The workers on Sunday evening voted in favour of continuing the occupation.

Minister Cullen yesterday said he could understand why the occupation happened.

“I think the workers and everybody . . . we’d all prefer if it hadn’t happened. But we are where we are.”

“But I’m here this morning and I have to say there’s a sense of calm about the place and I think that’s a good thing.”

However, the Minister was challenged by workers upon leaving the plant.

One man wanted to know what the Minister meant when he said things were better for them than they had been:

Mr Cullen said he was referring to the various proposals to keep the company alive and it was the company’s “prospects” that were better than on Friday.

Mr Aylward was also challenged by workers as he left the gallery yesterday.

“The people in the street; they have enough of these people who are getting away with millions, right?,” asked one worker.

The man, who did not wish to be named, added: “Like, there are ordinary citizens in this country who invested in this place . . . where is their money now? They expected a small little dividend from it.”

Workers who were not served with letters informing them that their jobs would be terminated, turned up for work yesterday.

Some of these workers, who have been given clearance to work from their union Unite, ensured that the furnace continued to function yesterday. Tending to the furnace at the Kilbarry plant is a continuous, “non-stop” process.

One former furnace operative, Bobby Gaulle, who worked at the plant for 37 years and took redundancy in November, said he is still owed “about €60,000”.

Mr Gaulle said that were the furnace to cease operating, it would cost “in the region of somewhere between” €8,000 to €11,000 to get it operational again.

“What happens is that the material hardens and the sides of the furnace would cave in.

“The way furnaces are built, they are kept together with heat. If you reduce the heat or knock off the heat she caves in on herself.

“And the stuff inside then just goes hard. Even to repair it would cost up to three million.”

Throughout yesterday, John Foley, a former chief executive of Waterford Crystal, engaged in talks with the receiver of the company, David Carson, and later with union officials at Kilbarry.

Unite’s Irish Regional Secretary Jimmy Kelly last night said that until yesterday morning, the receiver had resisted allowing Mr Foley into the plant to “look at the books”.

Speaking from the visitors centre at Waterford Crystal yesterday morning, MEP for Munster, Kathy Sinnott, said all TDs, MEPs and Senators should take a 20 per cent pay cut on their wages and “share the pain of these difficult times with our constituents”.

There will be further solidarity actions with the Waterford workers in days to. Here's a notice about a local action due be held tomorrow (later today over there).

Support the workers who have been treated appallingly. If they can do it to them, they can do it to us all. Please attend and defend against this attack on Waterford's economy, culture & heritage.Organised by Waterford Council of Trade Unions (WCTU)

The union for the workers at Waterford is the T&G section of UNITE. You can access their news of the event by going to the Irish region section of their website. The possibility that the works could be nationalized if a suitable buyer unwilling to keep them in operation cannot be found has been mentioned by union spokesmen. Molly thinks that reconstitution of the operation as a producers cooperative would be a better solution. No doubt the government would have to be involved as a guarantor of debt, but it would be better to have the state as a creditor rather than as a boss. There is no indication that government bureaucrats would be any better at running the business than the private owners have been. History actually suggests the precise opposite. The workers presently employed at the plant would have the advantage of knowledge unavailable to outside managers. Molly would further suggest that any "compensation" offered to the present owners (or their liquidators) be properly adjusted by subtraction of the debts that the government would have to underwrite. This, obviously, would be a matter of duelling accountants, but a case could be made that the sum owed would be less than zero. Small investors, of course, should be offered better terms than large holdings. It's all food for thought.