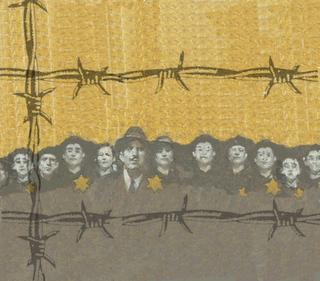 A PALESTINIAN SPEAKS ON IRANIAN HOLOCAUST DENIAL:
I was recently graced by contact by an old friend who had noticed this blog. This guy once had what I considered the best comment I have ever heard on my own bastard ethnicity. He opined that the Russian half of me made me capable of walking 30 miles in bare feet through a blizzard to acquire a frozen potato, but the Irish half of me guaranteed that I would cry, whine and complain every inch of the way. Truer words were never spoken.
My friend is Jewish, and he wrote me about something that is bothering him about what he sees in the anti-war movement today, its often ill-disguised anti-semitism. I'm still in the process of composing a personal letter to him, but like so many other things in Molly's life this has taken on the character of a project that goes on to say, "and besides that, and besides that and besides that". This may come from the Irish side or it may come from the fact that the other side of the family's original point of wander to the Crimea was from Alsace-Lorraine. The French have as bad a habit of the Irish of never saying anything in one word when 50 will do.
In the interests of brevity I can answer my friend's question with the observation, "no fucking shit", and this attitude amongst leftists is one amongst dozens of the offputting ways of leftism. But a recent article in the Toronto based libertarian socialist site Autonomy and Solidarity (http://auto_sol.tao.ca or see the Links section in this blog) has a reply from a Palestinian militant that criticizes the Iranian government's sponsorship of anti-semitic "scumminess" in far better terms than I ever could.
Mahmoud Al-Safadi is a Palestinian who served 16 years in Israeli jails. To his surprise he found that the freedom to read and educate himself in detention was greater than when the "ideology and social norms" of Palestinian society prevented him from self-education outside of prison. He read the works of Palestinian intellectuals such as Edward Said and Azmi Bishara, and he learned that the simple black and white version of the "Zionist conspiracy" was a fabrication. In other words he grew up.
He also learned that the Holocaust did indeed happen, whatever the lies of Islamic ideology. As such he recently wrote to the Iranian president saying that, "I am furious about your insistence on claiming that the Holocaust never took place and about your doubts about the number of Jews who were murdered in the extermination and concentration camps,organized massacres, and gas chambers,consequently denying the universal historical significance of the Nazi period."
He goes on to say that, "The more I learned the more that I realized that the Holocaust was indeed an historical fact and the more I became aware of the monumental dimension of the crime committed by Nazi Germany against the Jews, other social and national groups, and humanity in general."
The author goes on to question the so-called evidence that the Iranian regime uses to justify its anti-semitism and to call into question the views of the Iranian regime on the resistance to Nazism. He points out that the Iranian regime has fallen to a "two worlds" fallacy where they are under the mistaken impression that any weapon at hand against "Zionism" is useful even if it is a total fabrication. He says that such propaganda, "does a great disservice to popular struggles the world over" and that, "at best you cover your people and yourself with ridicule in the eyes of political forces who reject imperialism but cannot take your ideas and arguments seriously"
To read this essay in its entirety visit the Autonomy and Solidarity site given above. It should be pointed out that Mr. Al-Safadi has paid dues that the bloated rulers of Iran never have and never will. His decision to come to an accommodation with truth is admirable and gives hope that there are many more like him amongst the Palestinian People who are capable of working out ways of living together with their Jewish neighbours in the Middle East. Sorta restores your faith in humanity. On the other side there are also many Israelis who reject the imperial designs of their government.
Mr Al-Safadi concludes by asserting that the Iranian regime does the Palestinians no favours with its attitude. It actually works against their struggle. If only "the left" could learn from this example of one brave man who can see history in its truthful complexity rather than demonizing opponents.
Molly
Posted by mollymew at 6:39 PM

Yes, there is actually a fairly large (well by Canadian standards) anarchist movement in Isreal and it has been deeply involved in peace and anti-apartheid wall activities. People who are interested should check A-infos which always has postings from Isreali anarchists.