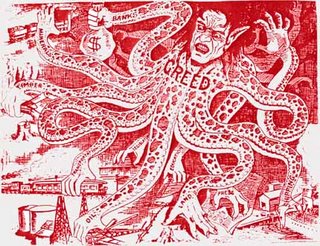 DON'T TRY THIS AT HOME:
That famous international business consultant, Mollymew LLB of the investment firm of Mollymew, Finagle, Finagle, Funt and Kittens once advanced the following proposition in regards to one of the principals of the following story in a previous entry on this blog. It was that,
"Nobody EVER becomes wealthy by investing their money wisely. You ONLY become wealthy by investing 'other peoples'' money wisely.
There should be an addendum to the following advise, to wit,
"You become wealthy faster if you avoid paying back the other people unless absolutely pressed by the law- and even then delay it as long as possible. It's best to never pay them back at all."
At the level of a few hundreds or thousands of dollars this sort of behavior results in prison time for fraud. At the level of hundreds of thousands or even millions of dollars it results in election to Mayor or, if the Gods smile, eventual leadership of a provincial Conservative Party. Hundreds of millions of such behavior give you the right to run for the federal Conservative Party leadership. Ah...who was Peter Pocklington ?
But speaking of the hundreds of thousands it comes to mind in a recent lawsuit launched by the receivers for the now-defunct Crocus Fund of Manitoba. The receivers for this fund, one of the most poorly managed labour sponsored funds in the country, have recently launched a lawsuit against the Winnipeg Goldeyes for recovery of the interest on a loan they made to the ball team in 1999.
The facts of the matter are that the Goldeyes took out a loan from the Crocus Fund for $375,000 on July 19th, 1999. They contracted to make semi-annual interest payments at 8%. Unlike a normal consumer loan they was no stipulation to pay back any of the principal. Despite making no payments on the first loan the Goldeyes were granted a second loan one year later for $59,149 at prime plus 2%.The present interest on the original loan that the receivers are suing the Goldeyes for is $305,000.
The principle owner of the Goldeyes is, of course, the Winnipeg Mayor, Sam Katz. The Goldeyes have already been granted privileges from the City of Winnipeg vis-a-vis land development for their parking lot. It would be interesting to watch future developments in terms of such Winnipeg businesses as Salisbury House, Maple Leaf Distillers and the Burton Cummings Theatre, as well as other enterprises that Katz has had a hand in.
Ah well, 2/3rds of a million dollars is chickenfeed in terms of what business is granted by government fiat in Canada each year. The sad thing is that the Labour Sponsored funds such as the Crocus have a theoretical mandate to develop local and small business and especially to help out producers' coops. Very few of them devote even a pittance of their funds to such goals, even if few are so grossly "private banks" as the Crocus was.
Private Banks ! It would be nice if you or I could take out loans with a payment schedule of every six months. It would be even nicer if we never made a payment and were granted a further loan a year later. It would be the nicest of all if it took the bank SEVEN years to move even if we made no payments at all. You could easily become wealthy by investing said money.
But once more kiddies...don't try this trick at home... it only works for the stalwart defenders of morality and ethics known as conservative politicians.
Posted by mollymew at 6:24 PM