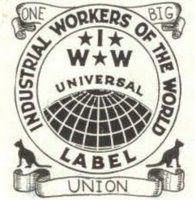 THE DAY OF THE "11s": PART ONE:
"SOCIALIST" BOSSES ATTACK SCOTTISH WOBBLIES:
It's Dec. 11th and her Royal Pubaness, Empress Mollymew I And Only declares this the "day of the elevens". The first eleven to note are the eleven workers at the Scottish Parliament. Of these five are IWW members. These workers are employees of the now-split Scottish Socialist Party, a semi-Trot group that became the darling of the British left for actually electing members to the regional Parliament of Scotland beginning in 1999 when their ex-leader Tommy Sheridan was first elected. Sheridan was joined by Rosemary Byme and 4 other members in the recent elections in 2003. True to their Trotskyist heritage the SSP began to infight, and the result was that Sheridan and Byme split off to form their own sect called 'Solidarity'. They took two of the original 13 parliamentary support workers with them during the split, leaving the magic number "11" with the original Party. The details of the split are singularly unedifying with a veneer of Sheridan's private life coating the usual Trot hunger to find tiny details to split upon.
The SSP and Sheridan's group now haggle over the exact sum that each group will receive from the Scottish taxpayer to promote their own convoluted agendas. The result has been that the remaining 11 workers are left without enough funds to support their wages. They can only continue to be paid if they "voluntarily" switch to the Sheridan group.
Merry Christmas ! The Scottish IWW refuses to take sides in this dispute. They are demanding that all six of the MSP honour their contract with their workers until the May, 2007 elections with no pay cuts or firings.
To follow the continued soap opera of the vanguard of the workers versus the workers stay tuned to the British IWW site at http://www.iww.org.uk .
Molly
Posted by mollymew at 7:16 PM