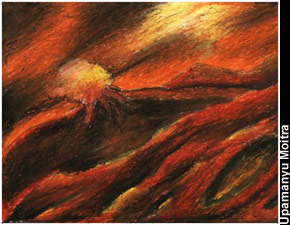 FROM THE WAVES ONCE MORE: THE RETURN OF VENUS:
Since passing its superior conjunction (when the planet appeared to go behind the Sun) on Oct. 27th Venus has gradually begun to creep away from the Sun, and it is now once more visible as the evening star. The planet has been visible at sunset since the beginning of December, but at that time only the best observers could spot it slightly above the western horizon a mere half hour after sunset. Tomorrow the planet will set about 20 degrees (about the width of two fists) south of west 50 minutes after sunset. As December goes on Venus will rise higher in the evening sky. By Christmas Day it will set a full hour after the Sun and be visible at a magnitude of -3.8 (magnitude is measured by an inverse scale; the lower the number or the higher the negative number the brighter the object). By New Years it will set more than 70 minutes after the Sun and will be prominent on the western horizon.
By the time April, 2007 arrives Venus will linger in the evening sky a full 3 1/2 hours after sunset. By the third week of May Venus will set as late as 11:45 PM daylight time (12:45 daylight savings time). Venus will reach its greatest elongation (the furthest distance from the Sun, 45 degrees) on June 8th. By July 12th, even as it recedes in the evening sky, it will have reached its greatest magnitude- -4.3, about twice as bright as it is now(magnitude is a logarithmic scale).
If you focus on Venus from now until August you will see the planet go through its phases, similar to that of the Moon. It is presently full. By early June it will be a "half-Venus", and by July it will be a crescent. If you are observing with a telescope or good binoculars you will notice that the apparent size of the disc will grow as it approaches "inferior conjunction" on August 18th, when it sinks once more below the night horizon. It will, however, return again by month's end to become the morning star.
2007 will be a great year for observing Venus.
Molly Notes: The graphic at the top of this page is from the collection of 'Postcards From Venus', a competition where artists were asked to visualize what the surface of earth's twin looked like.
Posted by mollymew at 7:10 PM