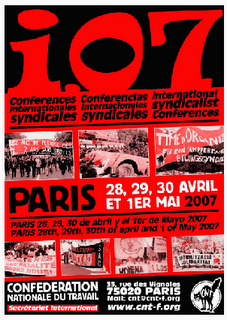 INTERNATIONAL SYNDICALIST CONFERENCE:
PARIS, APRIL 27th TO MAY 1st, 2007:
Previous conferences of the international syndicalist and anarchosyndicalist movement have been held in San Francisco in 1999 and Essen, Germany in 2002. The French CNT (CNT Vignoles http://www.cent-f.org ) has undertaken to host another gathering to point the way forward for international libertarian unionism.
The conference will begin on Friday, April 27th with a reception of the delagates. The morning of Saturday the 28th will be taken up with meetings and presentations of the various unions on numerous topics such as the cost of living, wages, redundancy, privatization, labour rights, institutions, revolutionary syndicalism, repression,etc.. The afternoon will be given over to "sectoral presentations" such as construction, education, postal services, health, janitorial services, cultural, press, transport, steel industry, agricultural, etc.. The day will conclude with a concert in the evening.
On Sunday the 29th the morning will be devoted to other libertarian themes that intersect with the union struggle such as women's struggles, anti-fascism, social ecology, housing immigration and imperialism. In the afternoon there will be a collective presentation of the various meetings, and a general assembly will follow in the evening. Monday, the 30th will be devoted to a showing of "militant movies" and visits to various locations in Paris. On Tuesday the conference will join other French anarchists for the annual Mayday demonstrations in Paris.
To keep up to date with the plans visit the site of the French CNT at http://www.cnt-f.org (seulement en francais) or watch the Anarkismo site (http://www.anarkismo.net -or see the Links section of this blog) for announcements that will have English translations.
Ah, Paris in the spring ! Hopefully the Spring of a New World.
Molly Notes:
A Google search of the internet will uncover what happened at the two previous conferences, I 99 and I 02. These conferences are basically put on by syndicalist forces outside of the IWA-AIT (International Workers' Association- Associacion International de Trabahadores: the "official" anarcho-syndicalist International). Many of these are members of International Libertarian Solidarity (see http://www.ils.sil.org or the Syndicalist Links section of this blog). The ILS site has many links that give a flavour of the supporting organizations. Each conference, however, attracts a number of groups that are outside of BOTH ILS and the AIT, and their is even participation from some groups within the AIT. The "unofficial" anarcho-syndicalist movement is far !!! larger than the "official" one and, at least in Molly's view, is no less "anarchist" than the more "purist" AIT.
Posted by mollymew at 9:52 PM