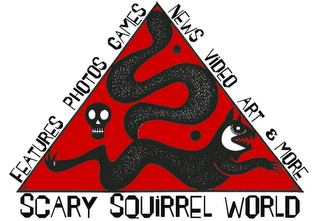 NEWS FROM SCARY SQUIRREL WORLD:
The ever expanding critique of the dialectical, post modernist praxis that aims to supersede all previous critique of the WCI- the Workers Comedic International brings you this latest bulletin from the masterful theoreticians at Scary Squirrel World( http://www.scarysquirrel.org ). As good post leftists the comrades at Scary Squirrel deny all connections with any previous material in other communiques and indeed deny that they mean anything they say. If anyone tries to pin them it must have been the other guy who said it. But anyways, here is something from SSW, people who know they're being funny:
WHERE DO SKWERLS COME FROM ?????
Patriots, do you ever wonder where skwerls come from ? Hard to believe, many people do not. Some compare their disinterest to wondering where super-conqueror-President Bush gets his swell ideas; it's enough that he has ideas.
But every Patriot understands the need to know the enemy, and chitterbox origins is an important part of that knowledge.
WHAT THE "EXPERTS" SAY...
Science tells us that the bushytail horde evolved out of the primeval ooze beginning with Paramys in the late Paleocene (about 55 million years ago). Paramys sported a mostly squirrel-like skeleton but without the arboreal adaptions. It also had a primitive jaw musculature which modern squirrels still retain.
The first critter we would recognize as a skwerl was Protosciurus . It had the unique ear structure of modern squirrels and looked little different than today's slavering, over-agitated, arboreal nutzys. The first fossilized Protosciurus bones were found in North America and date to the early Oligocene (23-37 million years ago). Thus, experts theorize that skwerls originated in North America, possibly in the Pacific Northwest. From there, they spread around the world culminating in a frenzied gambol into South America about 3-4 million years ago.
Sciurus, the modern squirrel genus, arose in the Miocene and has not changed since then. Among the rodents squirrels are considered living fossils.
THE PROBLEM...
Scientific theory on the drooling nutcrunchers origins is all well and good. It paints a historical picture of the spread of skwerlian debauchery around the globe. However, it fails to identify who or what is responsible for the bushytail horde. Consider this: the so-called experts are mute on what proceeded pre-protoskwerlian Paramys . They'de have us believe that it simply "evolved" from some other pre-protoskwerlian skwerlian.
More significantly, Paramys happened upon the scene in the Paleocene and Protosciurus during the Oligocene...but there appears to be no evidence of any skwerlian anywhere during the intervening time period, the Eocene. This strongly suggests that someone or something pulled Paramys from the market, came up with a better model, and released it back into the environment an epoch later. Thus, the evidence indicates that skwerls are the result of an Intelligent Designer with an intelligent design.
THE WHO AND THE WHAT...
Of course the design, or plan if you will, is no mystery. Every patriot knows it as the bushytail horde's plan for squirrel world domination. This nefarious plan was set in motion eons ago. It's historically seen in the sudden appearance of modern skwerls and their systematic rampage around the world using global shifts in land masses as platforms for conquest. Squirrel world domination is evidenced today by the maniacal skwerlballs' continuous attacks on the people, places and things important to human civilization. Unfortunately, defining who or what is responsible for unleashing the skwerlian menace in the first place remains a matter of conjecture. Currently, there are three competing theories. They are:
The Natural Theory: using "why ask why" reasoning, some simply believe that skwerls evolved as the evolutionary theorists suggest. In other words, they crawled out of the ooze with the rest of us and who cares where the ooze came from. A variation of this theory suggests that skwerls grow on trees and/or metamorph from some innocuous life form.
The Preternatural Theory: supporters of this theory think that skwerls are alien life forms from outer space. The theory solves the problem of how nutsys got to Earth, but not necessarily where they came from in the first place. Preternatural theory is very popular with the unfortunate victims of skwerlian abductions. Some claim that their chitterbox abductors imprisoned them in a giant tree on the far side of the Sun. NASA has been unable to confirm this.
The Supernatural Theory: a belief favoured by pathetic skwerlhuggers and espoused by the heresy of Orthodox Skwerlhugery. It claims that there is a mystical, immortal Nice Squirrel: The Nice Squirrel Planted the Tree of Delicious Nuts; and skwerls sprang forth from the Tree. The Tree supposedly grows in the Pacific Northwest where it is guarded by the immense Skwerlfoot. It should also be noted that common citizens often say that a benevolent non-skwerl deity is responsible, and Patriots frequently blame it all on a non-skwerl Devil.
Go to Scary Squirrel World for much more on this ultimate conspiracy theory. Read it in the light of so many other American toxic cultural exports, from fundamentalism to academic gobbledegoop, to primitivism, to post-leftism, to new age religion to neo-conservativism. All of these post- industrial wastes share one thing. They don't realize they're being funny. Scary Squirrel World knows it.
Much Fun,
Molly
Posted by mollymew at 8:32 PM

At last, evidence for Intelligent Design that we can sink our teeth into.