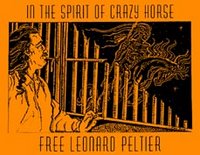 FREE LEONARD PELTIER:
The latest issue of the 'Industrial Worker' had a brief notice on the upcoming 14 th annual Leonard Peltier solidarity march on Feb. 10th, 2007 in Tacoma, Washington. This item is mirrored in greater detail at the IWW website (http://www.iww.org -or see the links on this board under 'Anarcho-Syndicalist Links'). The press release from the Tacoma Leonard Peltier Support Group available on the website gives a brief explanation of how the case of Peltier connects with such matters as the war in Iraq and the increasing authoritarianism of the US government. It ends with an interesting quote from Chief Sitting Bull that would have made a good addition to the quotes on cooperation that we posted here some days ago,
"As individual fingers we can easily be broken, but all together we make a mighty fist."
The Tacoma group is asking for both donations in solidarity and for other help in further publicizing Peltier's case. They can be contacted via bayou@blarg.net , and donations can be sent to Tacoma Leonard Peltier Support Group, Box 5464, Tacoma WA 98415-0464, USA. To receive updates on helping Peltier sign up to the NW Peltier Support list by sending an email to nwpeltiersupport-subscribe@lists.riseup.net .
To learn more about the case of Leonard Peltier who has spent 27 years in an American prison for a crime that there was precious little evidence that he committed and whose case has been investigated by Amnesty International see 'The Case of Leonard Peltier' at http://freepeltier.org . For a list of other actions elsewhere that may be held in Peltier's support see 'The Leonard Peltier Defense Committee' at http://www.leonardpeltier.net .
A little Molly note here on "you can't escape the bastards anywhere". If memory serves me well, which it doesn't always, Peltier was "scooped" in Canada in the community of Fort Simpson NWT. In her eternal quest to skirt the edges of the flat Earth and skateboard across the razor thin line that separates the ends of the Earth from the chaos that lies about Molly was once there. In the dead of winter none the less. A more isolated spot could hardly be imagined. Go along a few hundred miles of logging road that is barely passable with no signs of humans anywhere to be seen. Poof, you're at the "thriving community" that actually has visitors during the summer when the Mckenzie is open for shipping. Look hundreds of miles in any direction, and there ain't no people. This was many years ago, and perhaps things have changed since then, but at that time the 'Bay Store' was king.
Yet the RCMP hunted Peltier down there and he was eventually extradited to the USA on fabricated evidence. If things have indeed changed it only goes to emphasize the fact that you can't "run away" from society and hide in a little subculture or even in an isolated area. If they want you bad enough they will find you. The struggle to make things better can't be forwarded by crawling under the covers. Peltier had very good reasons to make for the edge of the Earth, but they found him. Very few who opt to drop out into subcultures today have anything near one millionth of the reason to run that Peltier had. They even make themselves less relevant by doing same, and they exist on the sufferance of their irrelevance. Peltier was not irrelevant, and he was hunted down. Think about it.
Molly
Posted by mollymew at 7:58 PM