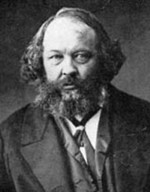 THE BEST OF THE BLOGS:
EUGENE PLAWIUK ON MICHAEL BAKUNIN:
Yesterday, Dec. 30th, was the 130th anniversary of the death of Michael Bakunin(1814-1876), one of the contributing thinkers in the origin of anarchism as a distinct political philosophy. Eugene Plawiuk has written a piece on his blog entitled 'Revolution is Progress: Micheal Bakunin' that goes into the intellectual influences on Bakunin's thought, some publications on Mikey and Bakunin's rivalry with Marx. It also contains numerous links to matters Bakunin, biographic and bibliographic. Plawiuk concludes his blog by republishing chapter 2 of Bakunin's 'God and the State'.
Plawiuk's Blog is a goldmine of opinion and fact on matters anarchist, labour and Marxist. Have a look at his other writings. Links to Michael Bakunin's other writings can also be found at the Anarchist Archives and the Bakunin Archive. Both these references are listed in our 'Online Anarchist Libraries' section. Both the complete text of 'God and the State' and 'The Immorality of the State' are available on our 'Texts' section.
Posted by mollymew at 10:02 AM