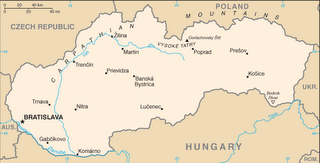 NEW INFOSHOP IN BRATISLAVA, SLOVAK REPUBLIC:
A new Infoshop has been opened in Bratislava, the capital of the Slovak Republic. The library titled Info-A-Police is the first ever to open in said country. (Molly note: in case you are wondering about the name, "police", pronounced "pol-its-eh" is Slovak-and Czech as well- for "shelf". The name means "info on the shelves".)
The shop is a reading room and library and has opened in cooperation with the local Red and Black Distribution and Priama akcia (Direct Action), the Slovak section of the IWA. As with other infoshops the comrades plan to turn the location into a venue for meetings and other events.
Very little anarchist material has been translated into Slovak to date, and the infoshop is offering literature in a number of languages such as Czech, English, German, Spanish, Russian and others. Like most infoshops this new venture is strapped for cash, and they would appreciate any donations of literature that you can make to them in English or other languages. So, if you have any spare propaganda hanging around gathering dust send it on down their way.
There original press release failed to give the full mailing address, but that busy little typist Molly wrote them and found out. It is:
Infoshop
13 kubikov
Transit steliery
Studena 12
Bratislava
821 04
Slovak Republic

The comrades can be contacted via email at info@infoapolice.sk . I've tried to add their website to the links section of this blog, but it doesn't seem to want to "take". It is http://www.infoapolice.sk . Hopefully it will "take" in this post.
Posted by mollymew at 9:51 PM