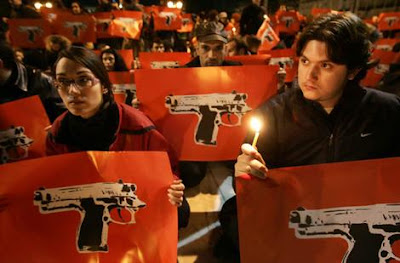 INTERNATIONAL POLITICS/INTERNATIONAL ANARCHIST MOVEMENT-GREECE:
SUCCESSFUL GENERAL STRIKE PUTS FURTHER PRESSURE ON RIGHT WING GREEK GOVERNMENT:
As Greece ends its fifth consecutive days of rioting over the murder of a 15 year old boy by police a general strike called by the General Confederation of Greek Labour (GSEE) and the union of government employees paralyzed the country for 24 hours. This put further pressure on the Conservative government, with a majority of only one seat in the Greek Parliament, to resign and call new elections. The protests and riots by Greek youth have resounded with the general population who harbour a traditional dislike of the police and simmering grievances against the policy of the ruling party. The following article from the Sydney Morning Herald tells the story of the strike. It should be noted that the two union federations' membership of 2.5 million is very significant in Greece, a country of only about 10.7 million people.
........................
Greek general strike fuels poll pressure:

Paola Totaro
Europe Correspondent
December 11, 2008
GREECE'S conservative Government, hanging on to power by just one seat, was being pushed to stand down and call an election as the nation endured a fifth day of demonstrations, clashes and strikes - the worst civil unrest in 30 years.
National stoppages - called by unions demanding improved wages and state support for low-income families - have closed banks, schools and businesses for 24 hours, grounding flights at Athens airport.
Despite calls from the Government for a postponement of the strike amid fears of further violence, the General Confederation of Greek Labour (GSEE) and the civil servants union - which represent about 2.5 million people - persevered, hosting union rallies outside parliament, adding intense pressure on the centre-right Government of the Prime Minister, Costas Karamanlis.
On Tuesday, thousands of protesters marched on the parliament in Athens, chanting bitter anti-government slogans and baiting police. Hours later, an estimated 6000 men, women and children donned mourning clothes to pay their respects at the funeral of the boy shot by police in a street altercation on Saturday night.
Alexandros Grigoropoulos, 15, died when police responded with gunfire after a squad car was allegedly pelted with stones by a group of youths in central Athens.
The lawyer for the two policemen charged over the killing said yesterday that a ballistics report showed the boy had been hit by a ricochet and not a direct shot. Alexis Cougias said this corroborated the officers' account that they had fired warning shots and not directly at the teenager.
The boy's family pleaded for privacy and calm at his funeral on Tuesday, and the burial in a coastal suburban neighbourhood unfolded without incident.
However, groups of young men later turned violent, throwing rocks and petrol bombs when riot police moved in. Police ignored local residents' calls for restraint and hurled tear gas into the crowd to disperse the youths.
The nation's 45,000-strong police force is on full alert in what is regarded as the biggest security mobilisation since Athens hosted the 2004 Olympics.
The shooting of the boy appears to have touched a nerve with Greeks of all ages, who are becoming dissatisfied with rising unemployment, deepening political scandals, and a sense of powerlessness in the face of the global economic downturn.
The opposition leader called for an immediate election, claiming the Government had failed to protect its citizens.
"This country does not have a government," said George Papandreou, leader of the socialist PASOK party. "We claim power … The only thing this government can offer is to resign."
Rioters have barricaded themselves into at least two university campuses in Athens. Police and military cannot enter educational institutions after a 1973 student uprising that resulted in the deaths of 22 people at the Athens Polytechnic.
Reuters quoted Panagiotis Sotiris, 38, of a coalition of leftist groups, as saying the violence was sparked by the teenager's death and by the "struggle to overthrow the Government's policy".
Posted by mollymew at 9:38 PM