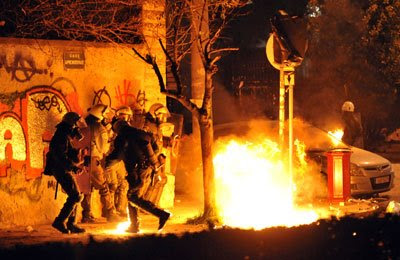 INTERNATIONAL POLITICS-GREECE:
GREEK RIOTS-THE SHAPE OF THINGS TO COME:
As the riots in Greece continue, with no clear victor on either side, public opinion in that country becomes more and more polarized on one side or the other. Various commentators from all political camps have given their opinions. Some of these have been quite off the wall. From the more gung-ho anarchists comes the idea that this is some sort of "revolution". It clearly is not, and cannot be until the majority of the population moves to change their actual conditions of living. Fighting police is essentially beside the point in terms of what defines "revolution". It is not even a "revolutionary situation" because presently the powers that be are still capable of ruling (poorly it must be admitted) as they have and the majority of the population are not yet under the necessity to change the way that they live. "Pre-revolutionary situation" perhaps best defines what is happening there. Political forces on the left, far larger than the anarchists, are quite hesitant, even in pursuit of their minimal goal of toppling the Conservative government.
This may be a good thing. The "autonomist" section of the Greek anarchist movement bears at least some credit for decades of keeping the pot boiling (though they haven't been the only force behind Greece's radical tradition since the overthrow of the dictatorship in 1974. They, however, do not just not have a program, but they glory in this very fact. If they have one idea it is only this..."more riots and more fighting". This incoherence would be fatal in a real revolutionary situation where other forces, better organized and with clearer ideas, would automatically out compete such people in setting up a new "revolutionary" regime. That is unlikely in Greece today. As in France in 1968 it is the Communist Party which in Greece hasn't followed its other European brethren into irrelevance who act as the major brake on the left forces.
Actually my favourite weird take on the events came from a so-called Polish "security expert". While mentioning the conspiracy theory that the riots were orchestrated by American intelligence because Greece had signed some trade deals that the Americans didn't like as "unlikely" but worth mentioning, his major thrust was that because the riots and their international solidarity actions spread so rapidly that they must have been centrally directed. In his mind he brought up the "international Islamist conspiracy" as the evil cabal behind what is happening. One wonders who would be foolish enough to hire his "expertise".
There are, however, other opinions that deserve attention because they have a much greater aura of plausibility about them. One of them is presented below, from the pages of the English newspaper The Independent. Are the riots in Greece merely a foretaste of greater unrest as the present economic hard times linger on ? As the article points out there are structural reasons beyond the clash of ideologies that have led to the present situation, and these reasons are common to many other developed nations.
...........................
Are the Greek riots a taste of things to come?:
Greece's riots are a sign of the economic times. Other countries should beware, says Peter Popham in Athens
Saturday, 13 December 2008