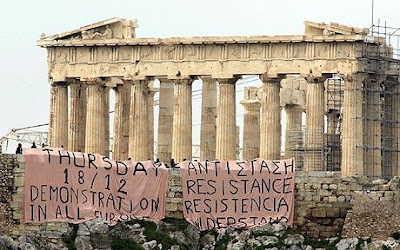 INTERNATIONAL ANARCHIST MOVEMENT-GREECE:
ACROPOLIS REDECORATED:
This just in from yesterdays events in Greece. See the picture above. Greek protesters have unveiled a banner on the Acropolis calling for solidarity demonstrations in support of their cause throughout Europe today. Rather brief notice. We'll see what the news says later today. For now this strikes me as a brilliant tactic. The picture will be displayed in news media throughout the world. You couldn't buy such advertising. Now Molly awaits the next banner on the Aeropagus where the Athenians used to debate and St. Paul preached. Here's the story from the British newspaper The Telegraph.
.................................
Greek protesters unveil banner on Acropolis:
Greece's most famous ancient monument, the Acropolis, became the latest stage for the country's deep political crisis on Wednesday when protesters draped it with banners calling for anti-government demonstrations across Europe.

By Nick Squires in Rome
On the twelfth day of unrest since a police officer's fatal shooting of a schoolboy triggered riots and arson, protesters unfurled two large pink banners from the stone walls of the ancient hilltop citadel, which looms over Athens.
"Thursday 18/12 demonstrations in all Europe," one banner read in Greek, English, Italian and German, while the other simply bore the word: "Resistance".
"We chose this monument to democracy, this global monument, to proclaim our resistance to state violence and demand rights in education and work," said one protester, who declined to give his name. "(We did it) to send a message globally and to all Europe."
A government spokesman, Evanguelos Antonaros, said the protests were "inexcusable" and accused the protesters of tarnishing Greece's image abroad.
The riots, which caused millions of pounds' worth of damage in Athens and a dozen other Greek cities, were fuelled by intense anger and frustration among young Greeks over low wages, high unemployment, police brutality and government corruption.
They have already inspired sympathy protests in cities across Europe, from Spain and France to Italy and Turkey. European leaders, including French President Nicolas Sarkozy, have expressed concern that they might spread as the global financial crisis worsens unemployment and economic hardship.
Nearly two weeks after the Dec 6 shooting of 15-year-old Alexandros Grigoropoulos in the edgy, graffiti-plastered Athens district of Exarchia, the anger of the protest movement shows no signs of abating.
In the latest violence, a gang of youths threw petrol bombs at a riot police bus in central Athens. The driver managed to escape unharmed but the vehicle was damaged, police said.
................................
MORE NEWS ON GREECE FROM THE MASS MEDIA
**Greece's Riots reveal the signs of a society in the throes of decomposition
**Greece faces uncertain new year
**Greek activists call for Europe-wide protests on Thursday
Posted by mollymew at 8:29 AM