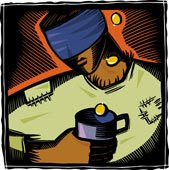 CANADIAN ANARCHIST MOVEMENT:
OCAP'S YEAR-END APPEAL:
The year is rapidly drawing to a close and the Ontario Coalition Against Poverty (OCAP) is appealing to its supporters to help out in their struggles in the coming year, to build a strong direct action oriented movement against poverty in their province. Help out if you can. Their appeal follows. Their mailing address is:
OCAP
10 Britain St.
Toronto, ON
M5A 1R6
..............................
THE FIGHT AGAINST POVERTY IS GOING TO A NEW LEVEL.:
THE FIGHT AGAINST POVERTY IS GOING TO A NEW LEVEL.
Please support OCAP's struggles in 2009
We have already started to take calls from laid off workers who don't know how to apply for EI or welfare. More and more people are calling us because they can't pay their rent and they face eviction. We are going into the worst economic crisis in generations and, while bailouts for the rich are readily available, the poor are going to have to fight for their survival in this crisis.
OCAP plans to go into action in 2009 to build a strong movement that can ensure that welfare offices don't turn away people in need, that a challenge to economic evictions is taken up, that workers, including those without status or on temporary work permits, are not exploited even more, that income support systems are strengthened,that 'economic stimulation' resources are allocated to meet the needs of communities, that poor people come out of this crisis united and stronger than ever.
In order to fight for these things, to build a strong resistance, we need funds. At the best of times, OCAP has very few financial resources to do its work. As this crisis worsens, we will face an overwhelming situation of people turning to us for help in the face of huge injustices and communities reaching out to us for support in their efforts to organize to confront those injustices. We will need to expand the scale and scope of our work dramatically and, while we will do it with few resources, we won't be able to do it with none whatsoever. We need the help of supporters to respond to the challenges ahead as we urgently need to.
Any and all donations to OCAP are appreciated but the most useful way is to become a sustaining supporter. All you have to do is send us a void cheque with the amount of money you want to donate a month. Include your name and address and, if you are doing this on someone's behalf as a holiday gift, their name and address so we can send a letter of thanks.
The next year is going to be very hard on a lot of people but it is also true that chances to fight back like this once in a lifetime.OCAP has a big role to play in that emerging fight. Please help us all you can.
Posted by mollymew at 6:06 PM