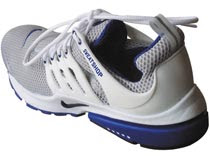 AMERICAN LABOUR:
SUPPORT WORKERS AT NIKE DISTRIBUTOR:
Very few companies have been so successful in the cotton candy world of selling a name rather than quality than the Nike Corporation. Nike has tried to distance itself from its image of being a sweatshop buyer from shops abroad, but in the USA itself its supply chain leaves much to be desired in terms of fairness to labour. Here's the story of one such instance from the American Rights at Work group, and what you can do to help out the workers affected.
...............................
Nike turns a blind eye:‏
From:
Liz Cattaneo,
American Rights at Work
(action@americanrightsatwork.org )
For mega-retailer Nike, workers' rights are taking a back seat to holiday profits.
This holiday, take a stand for the truckers who help keep Nike running!
When it comes to protecting workers' rights, it's time for Nike to stop talking about it and just do it.
Nike is one of the world's largest retailers – raking in billions in profits – but the truckers who haul all their sneakers to JCPenney say they have faced unfair working conditions including intimidation during contract negotiations and rising healthcare premiums.
Nike won't join other leading retailers in defending these workers, but you can.
Stand up for the drivers who ship for Nike – demand fairness TODAY!
Over 500 employees of Oak Harbor Freight Lines – the company that ships merchandise for Nike and Ralph Lauren to JCPenney – are on strike.
They're taking a stand against on-the-job abuses, including an outrageous proposal to cancel health coverage for retired employees, cut paid sick days and overtime pay for current employees, and reduce pension benefits.
But rather than negotiate in good faith, this shipping company has hired a notorious strike-breaking firm to strong-arm workers into giving up. What's more, the subcontractor reportedly recruited disadvantaged drivers from the south as replacement workers, promising them high wages and stable employment, then fired them when local employees became available.
Nike pretends to be an advocate for workers' rights – working hard to shed its association with sweatshops abroad – but hasn't stood up for these American drivers.
Show Nike that protecting America's workers is the right thing to do this holiday season. Take action today!
Thanks for all that you do.
Sincerely,
Liz Cattaneo
American Rights at Work
http://www.americanrightsatwork.org/
.........................
WHAT YOU CAN DO: Please go to THIS LINK to send the following letter to Nike management.
.........................
THE LETTER:
As an activist who cares about the way a company treats its employees, I wanted to let you know how upset I was to hear how the company that ships Nike's merchandise to JCPenney, Oak Harbor Freight Lines, has been treating its striking workers.

Rather than respond to employee concerns by negotiating in good faith, Oak Harbor has chosen to import teams of professional strikebreakers to coerce and scare loyal long-time employees.


People should be able to work in an atmosphere free of bullying, harassment and fear.


More and more, employers understand the value and importance of fair and respectful labor practices. Other Oak Harbor customers have chosen to respect the rights of these truckers, and I hope you will, too.


I urge you to stand up and ensure Oak Harbor employees get the dignity and respect they deserve, and the fair pay and benefits they've earned for a job well done.
Posted by mollymew at 10:10 PM