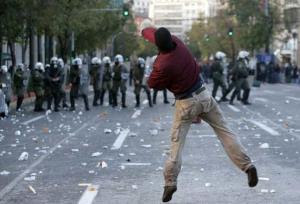 INTERNATIONAL ANARCHIST MOVEMENT-GREECE:
MORE DEMONSTRATIONS AND OCCUPATIONS IN GREECE:
The insurrection continues to develop in Greece, with more demonstrations and occupations of both media outlets and another union office. Here's the latest from the Occupied London Blog site via the Anarkismo website, both continually updating the news from Greece.
............................
Reports from the Athens demonstration:
Reports from yesterdays demonstrations in Athens. A student is shot on the eve of protests, the police are using new and stronger tear gas and five more radio stations and one more TV station are occupied.

Student shot in Peristeri, Athens
Last night (Weds), a 16-year old student was shot and injured in the area of Peristeri, Athens, close to his school. The 16-year old was sitting with about ten more students, discussing future mobilisations. The shot came from a person unknown, though it is near-certain that this would be either an undercover cop or a fascist. The police only issued a statement hours later. When the 16-year old’s co-students returned to the point of the assault to collect the bullet’s shell, another bullet was shot at them.
---
Student demo heavily tear gassed in Athens
The big student demo in Athens is being heavily tear gassed. The cops are using a new type of stronger gas. Most of us have retreated in the law school. A money transfer van is on fire. People have entered a nearby church, ringing its bells at every tear gas shot, adding a slightly surreal touch to the scene.
From: http://www.occupiedlondon.org/blog/
---
We just came back from the demo in Athens. The cops were, once again, extremely provocative: Tens of tear gas canisters and stun grenades were shot directly into the crowd. It seems like the newly ordered tear gas supply for the police is here.
People in Athens have been demonstrating and/or rioting for 13 consecutive days and nights.
Meanwhile, occupation of media outlets is spreading across the country: Today, the municipal radio of Tripoli, “Nea Tileorasi” TV in Chania, Politeia FM in Sparta and “Star FM” and “Imagine 897 FM” in Thessaloniki were occupied.
The “Labour Centre” (trade union building) of Patras was also occupied today, in protest against the sold-out leadership of the trade unions, demanding an indefinite general strike now.
From: http://www.occupiedlondon.org/blog/
.......................
MORE NEWS FROM THE MASS MEDIA ON THE SITUATION IN GREECE:
**Those Greek Riots
**'Greek Syndrome' is Catching
**Greek police brace for more riots
**Riots smashing platitudes in Greece
Molly will continue to present "mass media" stories on the events in Greece as they develop. What strikes me so far is how few of the stories have been of American origins. The above is the exception, where two of the four are from the USA. This carries on a grand tradition of almost deleiberate ignorance of the rest of the world on the part of the US news media. Another thing that strikes me is how many of the mass media stories publsihed so far have contained the warning that the Greek protests will spread to other countries. One can only hope so. It's not a certainty.
Posted by mollymew at 7:38 PM