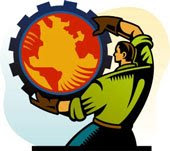 INTERNATIONAL LABOUR-CHINA:
SIT-IN AT CHINESE FACTORY:
The effects of the present economic crisis are worldwide. So, it seems, is the response of workers who are expected to bear the brunt of the bad times. From Chicago to Shanghai workers seem to be using the same tactics to fight back. Here's a report from the LibCom site about a recent sit-in strike at a Chinese factory over unpaid wages.
..........................
1,000 workers stage sit-in in Chinese factory:

Nearly 1,000 workers staged a rare sit-in protest outside a Shanghai factory Tuesday in the latest sign of strain in China's manufacturing industry, which has been hit hard by the economic crisis.
The workers were protesting because managers at the computer and telecoms equipment factory had failed to fully pay at least six months' worth of overtime, bonuses and benefits, one of the organizers said.
"I know the economy is bad now, but none of us can stand being badly treated by our employers," organizer Ding Xiaohua said.
Several police cars blocked the gate of the factory in southwest Shanghai while about a dozen officers surveyed the peaceful protest, which began on Monday. Workers said on Tuesday afternoon that some colleagues had been taken away by police, while a cordon was set up to separate the striking workers from bystanders.
"It's near the end of the year, most of us are migrant workers so we want to go back home with some cash so we can enjoy the spring festival," said Ding, a 24-year-old technician. The most important holiday in China, the spring festival is in late January.
Ding said the workers were each entitled to a 1,200-yuan (175-dollar) bonus after working from June to September in temperatures greater than 40 Celsius (104 Fahrenheit). The summer bonus was supposed to be in addition to their basic 960 yuan monthly salary.
Ding said managers were also paying just over half of the overtime workers were entitled to and were failing to pay the full required amount for medical insurance.
China's export growth has slowed significantly with many factories in the industrialized south closing and the economy expanding at the slowest rate in five years.
Posted by mollymew at 8:24 PM