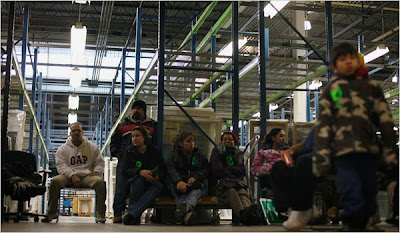 AMERICAN LABOUR:
FACTORY OCCUPATION IN CHICAGO:
As the world economy spirals faster and faster towards a situation not seen since the 1930s American labour is rediscovering a tactic from that era as well, the sit down strike and factory occupations. Last Tuesday workers at Republic Windows and Doors in Chicago were given layoff notices without the standard proper notice. On Friday they protested this by occupying the factory, vowing not to leave until they were paid appropriate severance pay. Here's the story as seen by the New York Times.
...............................
In Factory Sit-In, an Anger Spread Wide:
Published: December 7, 2008
CHICAGO — The scene inside a long, low-slung factory on this city’s North Side this weekend offered a glimpse at how the nation’s loss of more than 600,000 manufacturing jobs in a year of recession is boiling over.

The company, which was founded in 1965 and once employed more than 700 people, had struggled in recent months as home construction dipped, workers said.
Workers laid off Friday from Republic Windows and Doors, who for years assembled vinyl windows and sliding doors here, said they would not leave, even after company officials announced that the factory was closing.
Some of the plant’s 250 workers stayed all night, all weekend, in what they were calling an occupation of the factory. Their sharpest criticisms were aimed at their former bosses, who they said gave them only three days’ notice of the closing, and the company’s creditors. But their anger stretched broadly to the government’s costly corporate bailout plans, which, they argued, had forgotten about regular workers.
“They want the poor person to stay down,” said Silvia Mazon, 47, a mother of two who worked as an assembler here for 13 years and said she had never before been the sort to march in protests or make a fuss. “We’re here, and we’re not going anywhere until we get what’s fair and what’s ours. They thought they would get rid of us easily, but if we have to be here for Christmas, it doesn’t matter.”
The workers, members of Local 1110 of the United Electrical, Radio and Machine Workers of America, said they were owed vacation and severance pay and were not given the 60 days of notice generally required by federal law when companies make layoffs. Lisa Madigan, the attorney general of Illinois, said her office was investigating, and representatives from her office interviewed workers at the plant on Sunday.
At a news conference Sunday, President-elect Barack Obama said the company should follow through on its commitments to its workers.
“The workers who are asking for the benefits and payments that they have earned,” Mr. Obama said, “I think they’re absolutely right and understand that what’s happening to them is reflective of what’s happening across this economy.”
Company officials, who were no longer at the factory, did not return telephone or e-mail messages. A meeting between the owners and workers is scheduled for Monday. The company, which was founded in 1965 and once employed more than 700 people, had struggled in recent months as home construction dipped, workers said.
Still, as they milled around the factory’s entrance this weekend, some workers said they doubted that the company was really in financial straits, and they suggested that it would reopen elsewhere with cheaper costs and lower pay. Others said managers had kept their struggles secret, at one point before Thanksgiving removing heavy equipment in the middle of the night but claiming, when asked about it, that all was well.
Workers also pointedly blamed Bank of America, a lender to Republic Windows, saying the bank had prevented the company from paying them what they were owed, particularly for vacation time accrued.
“Here the banks like Bank of America get a bailout, but workers cannot be paid?” said Leah Fried, an organizer with the union workers. “The taxpayers would like to see that bailout go toward saving jobs, not saving C.E.O.’s.”
In a statement issued Saturday, Bank of America officials said they could not comment on an individual client’s situation because of confidentiality obligations. Still, a spokeswoman also said, “Neither Bank of America nor any other third party lender to the company has the right to control whether the company complies with applicable laws or honors its commitments to its employees.”
Inside the factory, the “occupation” was relatively quiet. The Chicago police said that they were monitoring the situation but that they had had no reports of a criminal matter to investigate.
About 30 workers sat in folding chairs on the factory floor. (Reporters and supporters were not allowed to enter, but the workers could be observed through an open door.) They came in shifts around the clock. They tidied things. They shoveled snow. They met with visiting leaders, including Representatives Luis V. Gutierrez and Jan Schakowsky, both Democrats from Illinois, and the Rev. Jesse Jackson.
Throughout the weekend, people came by with donations of food, water and other supplies.
The workers said they were determined to keep their action — reminiscent, union leaders said, of autoworkers’ efforts in Michigan in the 1930s — peaceful and to preserve the factory.
“The fact is that workers really feel like they have nothing to lose at this point,” Ms. Fried said. “It shows something about our economic times, and it says something about how people feel about the bailout.”
Until last Tuesday, many workers here said, they had no sense that there was any problem. Shortly before 1 p.m. that day, workers were told in a meeting that the plant would close Friday, they said. Some people wept, others expressed fury.
Many employees said they had worked in the factory for decades. Lalo Muñoz, who was among those sleeping over in the building, said he arrived 34 years ago. The workers — about 80 percent of them Hispanic, with the rest black or of other ethnic and national backgrounds — made $14 an hour on average and received health care and retirement benefits, Ms. Fried said.
“This never happens — to take a company from the inside,” Ms. Mazon said. “But I’m fighting for my family, and we’re not going anywhere.”
.............................
The story is being covered locally in Chicago by the Pilsen Prole Blog. Go there for continued updates. Here's a report from inside the occupation by the Pilsen Prole Blog.
............................
Updates on the situation at Republic Windows... :

Hi All,
I am reporting at this moment from the worker occupied Republic Windows factory in Chicago.
I don't have any new audio for you yet but I do have some new news items...
1. Unofficial word is that there seems to be a strong likelihood the company had planned to close and move operations out of state. The workers had feared this since the equipment was removed from the factory a few weeks ago. UE staff have been investigating the situation and may have turned up evidence that this was the company's plan. This is a tried and true tactic of many manufacturers - closing a facility with decent wages and benefits and re-incorporating, sometimes under a new name, where they can pay substantial less.
2. There is more and more talk amongst the workers and UE staff that the company should remain in operation in some capacity. Many of the supporters who have been showing up have been encouraging the workers to take over the factory. Up until now, the workers s 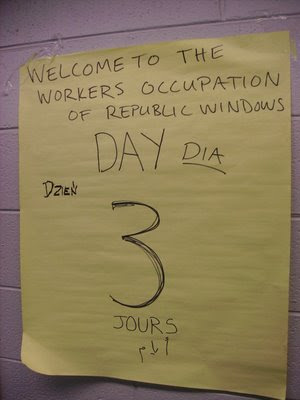 eemed to think that closure of Republic could not be prevented. But I think this situation maybe changing.
3. There will be a press conference at City Hall tomorrow at noon. It seems as if some important announcements will be made than. But UE staff are saying that nothing will be resolved before 4 PM tomorrow when the company, the bank and the union meet.
4. The rally planned for 12 noon Tuesday outside the LaSalle Bank building at 231 S. LaSalle has been re-schedueled to Wednesday.
5. There is a rally planned outside the Bank of America facility in La Vilita (26th & Trumbull) by the March 10th Committee for 2 PM tomorrow. Their message is that the Latino community wants Bank of America to give their workers their due or Latinos will pull the money out of Bank of America.
You can see more pictures here...
http://s207.photobucket.com/albums/bb5/kronstadt2/Republic%20Factory%20Occupation%202/
.............................
MOLLY NOTES: It's always quite heartening when workers decide to fight back rather than meekly accepting whatever crumbs management tosses to them. One can only hope that factory occupations become even more common as the economy worsens. At a certain point when they are common enough actual takeovers of the facilities become more and more likely and acceptable to public opinion. Such takeovers are the only way in which many jobs have even the ghost of a chance of being preserved. the politicians will hurry to play catch up and support such actions, just as they have supported this present occupation. It's all a matter of public opinion, and public opinion changes as the actions are done over and over and become normal. Molly has covered other factory occupations here in Canada, as well as the 'Strike Bike' situation in Germany where workers actually did resume production under workers' control. The factory occupations in Argentina during the worst of the economic crisis in that country are an even larger example. May there be many more of such events.
Posted by mollymew at 9:35 AM