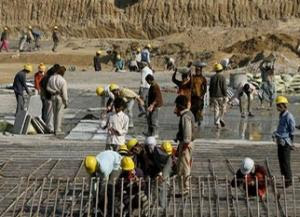 INTERNATIONAL LABOUR-INDIA:
WORKERS FIGHT BACK AT CONSTRUCTION SITE OF COMMONWEALTH GAMES:
Here's an interesting item from the LibCom website. Working people worldwide are exposed to unsafe and unhealthy conditions at their place of work, but far too often they merely tolerate the inevitable toll on themselves and their workmates. Sometimes, however, they do fight back. This is one of those instances.
...........................
Death sparks building worker riot in Delhi:
After a fatal accident on the Commonwealth Games construction site more than thousand building workers destroyed company offices, cars and trucks.
The aggravating global crisis imposes a new social frame-work for incidents like this: the daily deaths and legal murders become explosive.
The cops shooting a fifteen year old became the trigger of social unrest in Greece, the fatal accident of a building worker sparked the simmering unrest.
The construction site in Delhi is a prestigious show-piece of the capital city, a costly parasitic display of anti-social wealth in times of proletarian misery, desire and wrath...
The Hindu reported that a 28-year-old worker was killed at the Commonwealth Games Village site near Akshardham Temple on Sunday morning when a portion of the crane being used to lift materials to the eighth floor of an under-construction building in the complex fell on him.
The accident led to tension at the site as thousands of workers demonstrated against the project developer, EMAAR-MGF, and the contractors, Ahluwalia Contracts.
Three of their offices were ransacked and more than half-a-dozen vehicles, including SUVs, an ambulance and a dumper truck, were damaged by the mob. The violence, which took place in phases, lasted over four hours.
A case of negligence against the contractors has been lodged with the Pandav Nagar police station. Meanwhile, a company of Delhi reserve police was deployed inside the village to control the situation. The workers claimed that another labourer, Manish (24), was also injured in the incident. There were claims, too, that B P Singh, legal advisor for the contractors was attacked by the workers.
Police said that matters went out of hand around 9.30am. "Thousands of workers at the site suddenly went on the rampage after finding that senior officials had fled the scene. With no news on Shailendra's condition, they barged into the adjoining three offices, broke windows, ransacked the rooms and destroyed computers. Later, they marched to the main security room and tried to set it on fire. They also attacked cars at the site," said a senior police officer.
However, the workers were in no mood to relent. "There have been regular accidents at this site. But the management has never taken our warnings seriously. We demand immediate compensation and a proper identity-card that mentions our designations," said Changoori Singh, a worker at the site.
Posted by mollymew at 5:47 PM