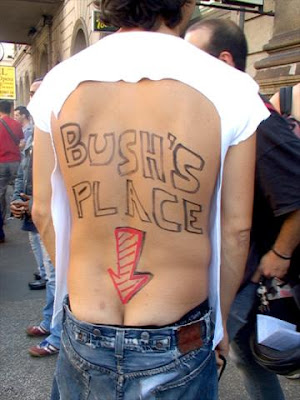 CANADIAN ANARCHIST MOVEMENT-TORONTO/MONTRÉAL:
SHOES FOR BUSH:
Pity poor Emperor George Bush II. As he tries desperately to "define his legacy" he is not only detested across the world but also ridiculed. The photo above pretty well sums up the general feeling of world opinion in regards to this man. It is the Emperor's misfortune to leave the throne not on a note of fear and awe but rather one of ridicule, and one man, the Iraqi journalist Muntadhar al-Zeidi, has pointed out that the Emperor has no clothes. This in front of the whole world. The actions of this journalists have made him a folk hero in countries both Muslim and otherwise, and solidarity demonstrations have been held across the world demanding his release from the Iraqi jail where he is being held.
Canada is no exception in this matter, and anarchists have been prominent in organizing the events in this country. To say the least this sort of action captures the public imagination with a far more favourable light than play-acting at Black Blocs. Here's the story of recent demonstrations held in Montréal and Toronto in solidarity with al-Zeidi. All that Molly can say is that Bush is a "shoe-in" for the most unpopular man in the world today. From the Toronto Sun...
.......................
Protesters shoe Bush in effigy:
At T.O. and Montreal rallies
By JESSICA MURPHY AND TAMSYN BURGMANN, THE CANADIAN PRESS
Anti-war protesters held a symbolic shoe toss yesterday in support of jailed Iraqi journalist Muntadhar al-Zeidi.
About 40 protesters in Toronto and Montreal braved the cold to let fly in front of their respective U.S consulates.
In Toronto, a dirty pair of sneakers was stuck toe up in a high pile of fresh snow, protesters clutched red and aqua-blue flip-flops with messages like "Shame on Bush" and "Bush out/Mass Killer" scrawled on the soles and embraced the comedic side of al-Zeidi's actions.
Dressed in a Santa Claus suit and white beard, Hicham Safieddine handed out the shoes as "gifts."
'BIT HUMOUROUS'
"I thought I'd do something a little bit humorous, not every protest has to be serious," he said. "It's a non-violent form of our protest against the fact we still have an occupation in Iraq; we still have people dying."
Demonstrators in Montreal pelted a black-and-white photograph of George W. Bush with boots, shoes and slippers and denounced the U.S. war in Iraq and the NATO-led war in Afghanistan, before marching to a downtown Canadian Forces recruiting station.
"Today is an act of humour in a sense but it's also a profound situation and context," activist and journalist Stephan Christoff told the Montreal crowd.
DROP OBJECTIVITY
Organizers also urged local journalists to ditch their veneer of objectivity by lobbing footwear at the image.
"We want to break this ideal that journalists stand in this world of objectivity, stand in this world where opinions don't exist," Christoff said.
Amir Khadir, who was elected to the legislature in this month's provincial election, was one of the first to chuck a shoe. He said al-Zeidi's actions were simply an expression of rage at the hundreds of thousands of deaths caused by the war.
"I represent the deep sentiment of thousands of members of assemblies all over the world," he said. "Bush has denied democracy and lied to millions of people. He deserves no respect."
Since the incident, the journalist has become a sort of global folk hero. News reports say the Turkish shoemaker who made al-Zeidi's shoes has been flooded with 300,000 orders for the model. They're considering renaming it the "Bye-bye Bush."
Posted by mollymew at 5:04 PM