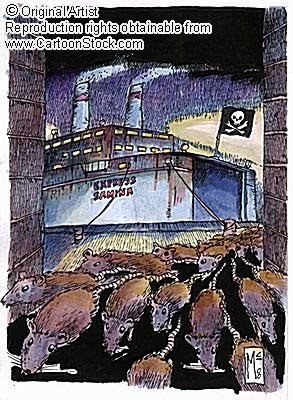 CANADIAN POLITICS:
LIBERAL-NDP COALITION PROSPECTS GROWING MORE DISTANT:
What a difference a few days can make in politics. Ever since Sneaky Stevie, our beloved comrade leader Prime Minister, provoked Canada's political crisis by a bald faced partisan attack on the other parties while he should have been paying attention to the economy the Liberal-NDP coalition that was formed to oppose and possibly replace him has done more for its own destruction than the Conservatives have.

It didn't take long for various rats of the Liberal persuasion to start abandoning the ship at the first sign of a leak. Within days MPs such as Irwin Cotler, Keith Martin, Scott Simms, Frank Valeriate (the first rat into the lifeboat) and Jim Karygiannis began expressing public doubts about the advisability of the coalition and whether it was better to compromise with the Conservatives. Realizing how much dead weight that leader Stephane Dion represented the Liberal Party moved with unseemly haste to ditch him. This, however, was rather like seeing that the ship was listing to fall upon the "solution" of opening a hole in the other side of the hull. Who was to replace him ?
The two front running candidates took quite divergent positions. Like Don Quixote the underdog Bob Rae set about the stump Liberal faithful across the country, valiantly trying to sell the idea of the coalition as the only way to slay the Conservative Dragon. The caucus favourite, Michael Ignatieff, took his cue from another fictional character, and like Achilles he sulked in his tent, keeping as low a profile as was humanly possible about the whole idea of the coalition. Rumours had it that he had already provoked hostility within the caucus by opining that it would be better to wait and see what the New Year's Conservative Budget contained before deciding whether to oppose it.
In the end it was Ignatieff who was the most realistic, and Rae's quixotic crusade to reach the ordinary Liberal members floundered on the rocks of one great unshakable fact- in the end the Liberal party is one of the furthest things from a democratic organization, and it doesn't matter one iota what the "grassroots" want. As the Liberal caucus made its choice of Ignatieff plain Rae was forced into what must be one of the greatest craven capitulations in Canadian political history. Tonight he withdrew from the race for the Liberal leadership, and pledged his full unconditional support for the beloved comrade leader Michael Ignatieff.
With "The IG" in control the presumed coalition is quite clinically dead. It only awaits a decent burial. It would take a massive act of suicidal stupidity on the part of Harper and the Conservatives to revive it. No doubt the original "mini-budget" was an act of arrogance and somewhat stupid, but I don't think you can trust Harper to make the same mistake twice, especially as the Conservatives have all but abandoned any near term prospect of majority government by playing the "Québec card". Besides being something near to the apotheosis of hypocrisy (how often have the Conservatives and the Alliance before them relied on and plotted with the Bloc, and who was the major figure behind the formation of the BQ ?) this tactic has no guarantee of being useful in anything but the short term. Hence the uncharacteristically conciliatory tone of Sneaky Stevie as the battle for control of the Liberal Party reached its end stage. To listen to his speech tonight you would think that he was proposing a 'Conservative-Liberal Coalition', and maybe that was exactly what he was doing.
As the weeks before the next sitting of Parliament drag on look to the leaping of Liberal rats from the sinking ship of the coalition to become a full flood. If the anti-coalition forces in the Liberals could not be restrained before their boy became leader don't expect them to do anything but grow now. In a sense it is a shame. If the NDP-Liberal coalition could have stuck together they might have been able to unseat Harper come January. That won't happen now. Not that the Coalition would have done anything but blunder their way through the economic hard times ahead, but blundering is probably better that what even a halfway contrite Harper will do. Harper harbours many ideological beliefs that will actually worsen the effects of the upcoming recession/depression.
So, let's sing a dirge for the comely corpse of the Coalition and its plans. Canada would do far better with permanent minority governments and coalitions than it does under any majority, either Liberal or Conservative.
Posted by mollymew at 8:01 PM

You can always guarantee the Liberals to stab you in the back. I just couldn't believe this coalition thing to be a reality. Now with the Ig in the drivers seat, i guess its time to break out the "Harper Lite."