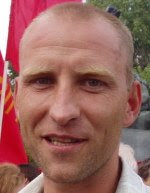 
Workers in Russia have a particularly hard time organizing faced as they are by employers who would be better styled as gangsters and a government apparatus that is, at best, indifferent and incompetent. Here from the Labour Start site is the story of one such struggle and what you can do to help.


Alexei Etmanov (pictured), the leader of the Ford-Vsevelozhsk trade union and co-chairman of Interregional Trade Union of Autoworkers (ITUA) has been the target of two brutal attacks on November 8 and 13. An anonymous caller following the first assault contacted the union and warned Etmanov to stop his union activities or "we will take away your life," the caller said. No one has been charged for the crimes and an investigation has been suspended. Other members of ITUA have been assaulted, including the leaders of the local trade union organisation of Taganrog automobile plant, Alexei Gramm and Sergei Brizgalov. Those incidents were not investigated either.

The International Metalworkers Federation is carrying out a campaign to protect the leaders of ITUA, demanding that the Russian authorities conduct a complete investigation of all cases of the assaults and to punish the guilty ones - both those that took part and those who ordered the crimes to be committed.
........................
Please go to THIS LINK to send the following letter to Russian authorities.


THE LETTER
I am calling on you to take all possible measures to find the criminals who are guilty of attacking Alexei Etmanov, the leader of the Interregional Trade Union of Autoworkers, on 8th and 13th of November 2008 in Vsevolozhsk, Leningrad region and the activists of this trade union Alexei Gramm on June 24th and Sergei Brizgalov on July 26th of this year in Taganrog, Rostov region.


In the state with rule of law, which the Russian Federation is, an investigation of such outrageous incidents, challenging the foundations of democracy and civil rights, should be a matter of honour of the law enforcement authorities. Your position gives an opportunity to show the Russian and international public, whose attention is attracted to the situation around ITUA, that the supreme rule of law in your country is stronger than the wishes of certain individuals to silence the leaders, whose views they do not like. I am calling on you to use all your powers to confirm the effectiveness of this principle.
Yours sincerely,
Posted by mollymew at 8:07 PM