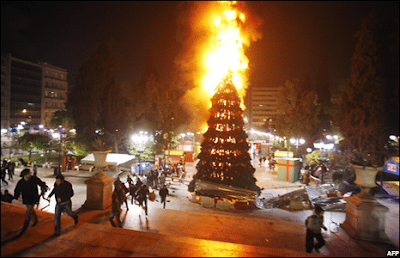 INTERNATIONAL ANARCHIST MOVEMENT-GREECE:
EVENTS OF DECEMBER 12 IN ATHENS:
Here from the Athens Indymedia website is what happened last Friday, December 12th.
........................
Some actions from December 12:
In Athens and the surrounding regions:
There was a march at Omonia at noon of thousands of people, which the police met with tear gas and flash bang grenades. At one point as the march passed by the offices of Kougias, the lawyer for the police officer who killed Alexandros, the offices were broken into and trashed. At Stadiou and Korai Streets, riot cops arrested and beat a 13 year old girl, journalists caught it on video and were themselves threatened and beaten by police.
Additionally there was a gathering at Syntagma Square at 3:30 p.m., a bicycle action at 9:30 p.m., and a sit-in at Syntagma Square at 10 p.m. There was a march at 10 a.m. of high school students in Palio Faliro which ended up at the police station there. At 1 p.m. there was a gathering of workers in psychiatric units for children and adolescents, in front of the police department in Chalandri. About 300 people marched in Agios Dimitrios at around 8 p.m.
In other locations: At 6 p.m. there was a march starting at Kamara (Thessaloniki) during which the offices of LAOS and New Democracy were attacked, with many supporters in the area applauding and cheering the demonstrators, and at 6:30 a gathering and protest at the Labor Center of Thessaloniki. In Patra at a demonstration a student was injured by tear gas that caused a serious skin reaction, in Leros middle school and high school students demonstrated, in Volos people marched and the police used tear gas, in Giannena people marched with no police present, and, with no police to provoke them, there were no disturbances. In Ilioupoli, two young students at a protest blocking the road were struck by a car which then took off, and the license plates were later found to be unregistered.
A map of schools and universities taken over by students has been started at http://www.edopolytexneio.org/ , while a radio station and a television station were even taken over for a short time, with information and statements about the murder of Alexandros and the use of police in service of state repression.
These and many other actions took place in the cold and rain. A new round of marches and gatherings is set for Saturday, December 13.
The police say that they are running out of tear gas, having used 4600 canisters in this one week, and they are trying to get more from foreign sources. There are over 170 arrests so far in Athens alone.
...........................
GREEK ANARCHIST WEBSITES:
What follows is a short list of Greek anarchist websites, mostly taken from our 'Links' section. Those which have English content are marked with an "(ENG)" after the link.
Athens Indymedia (ENG)
Anarchist Site for Counterinformation & Action
Anti-Authoritarian Movement (ENG)
Anarchy Greece
Bablylonia Online
Babylon Media
Balkan Decentralized Network (ENG)
Farma Collective
Indymedia Greece
ESE Greek anarchosyndicalists
Posted by mollymew at 9:47 AM