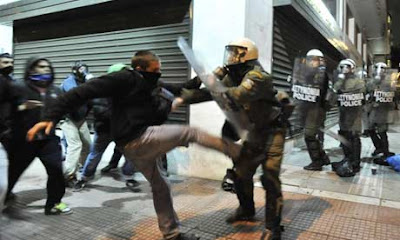 INTERNATIONAL ANARCHIST MOVEMENT-GREECE:
MORE ON THE MURDER OF ALEXANDROS GRIGOROPOULOS:
The following was carried today on the website of Athens Indymedia. The forensic report on the shots that killed the Athenian teenager has yet to be released. Different sources have claimed different stories as to its contents. I'd hate to be in the shoes of the person who is charged with doing the analysis. No doubt he is checking out flights to Belize at this time. In any case the story of the police is beginning to unravel with the presentation of further reports, some of them from the police themselves.
..............................
More of the truth about Alexandros' murder, from... cops!:
Excerpts of statements from the cops near the murder and from the radio conversations with central operations contradict the stories of the two cops involved in Alexandros' murder.
More of the truth starts to come out about Alexandros' murder, as we hear statements from other police in the area that night.
Excerpt from statements given by some members of the squad of riot police that were guarding the PASOK offices on the night Alexandros was murdered.
"I saw the two guards go on foot towards Navarinou and a little afterwards I heard 3 or 4 bangs... We saw the two individuals coming, walking without saying anything, they got in the patrol car and left towards Ch Trikoupi Street." (F. Soufis)
"I saw them park the patrol car at Ch. Trikoupi... I asked one of them, "what happened, guys?" but he didn't answer... The two went on foot towards Z. Pigis... After, I heard 3 to 4 gunshots. Arriving at the corner, I saw the two guards pass us running towards the patrol car. I didn't hear them say anything..." (Athanasios Dellis)
"What happened?" I asked them. "Go down there," they told me. "Wait," I answered him. "They didn't say anything... They went on foot towards Navarinou." (Athansios Radis)
Note:
If the cops were really acting in self-defense, they wouldn't have parked the car, refused to answer any questions from their colleagues, walked back and encountered the youths a second time, fired the shots, walked back to the car, again refused to answer questions from their colleagues, and driven away.
Record of the conversation between the squad in front of the PASOK offices and the police Operations Center:
21:00:03: Squad 545: At Navarinou from what the vehicle informed us there are about 4 or 5 individuals!
21:04:04: Squad: A little before there was some confrontation with the patrol car and some objects were thrown...
21:04:28: Center: They informed us that four individuals are on the spot... the squad is to remain in its position...
21:04:55: Center: You will not act without a command, you will not go down to Ch. Trikoupi and Navarinou.
21:07:02: Center: Does the patrol car have damage?
21:08:13: Squad: Minor damage... As I saw, only to the body. [Not windows, etc.]
21:10:24: [note: the youth has already been shot and the two police officers have already left.] Squad: Only a few people have appeared, 4 or 5, and they are going back to Tzavella street.
21:10:51: Center [First reference to gunshots]: Are there gunshots at your location? The squad does not answer, the center insists: I am asking if we had gunshots, we want you to inform us about this.
21:11:26: Squad: There were some flashes, I don't know if they were from a firearm or a firecracker...
21:19:25: Squad: We had departures from Ch. Trikoupi and verbal provocations.
21:19:30: Center: From how many individuals?
21:19:35: 2 to 3 individuals remain and are denigrating the cops.
21:26:01: Squad: From a passer-by we have the information that there is someone dead. 21:26:09: Center: Acknowledged.
Note:
Police did not go to the scene and investigate until three hours later. At that point they found bottles, rocks and metal ashtrays. We don't know if they were left there/thrown by others earlier before the murder or later after the ambulance had come.
Excerpt of statement given by the partner of the cop who pulled the trigger.
"We were surprised and we moved the vehicle away [after being attacked by a group of youths]. After we secured it so they wouldn't set it on fire and we wouldn't be burned, we headed to see who the individuals were and what their intent was. Arriving, there were 30 individuals who threw at us sticks, rocks and likely molotovs. [He describes throwing the flash-bang grenade and his partner firing three warning shots] The individuals moved back with the gunshots, and after we saw that we were ok healthwise, we headed off to take our vehicle to the department." (V. Saraliotis, partner of Korkoneas who was in the patrol car at the time)
Note:
Both of the cops implicated in the murder said in their statements that there was a group of 30 people but according to the records from the Operations Center, they only mentioned 3 or 4 people. It is curious that the two cops, after leaving on foot, never once apparently looked back at the crowd of 30 people that was such a threat to them that they had to fire warning shots, and never noticed that they had killed someone, and that a passer-by had to bring it to the attention of the riot squad instead.
............................
MORE NEWS ABOUT GREECE:
**Greek Inspired Protests Spread Across Europe
**Angry Young Greeks Give Wake-Up Call to Europe
**Fresh Riots in Athens as Protests in Greece Enter Eighth Day
Posted by mollymew at 2:41 PM