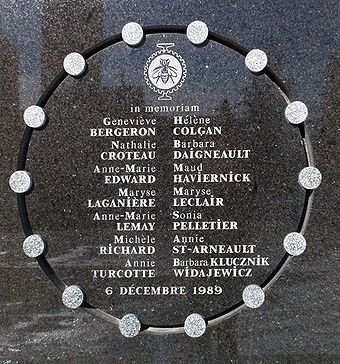 HISTORY:
NINETEEN YEARS AGO TODAY- THE ÉCOLE POLYTECHNIQUE MASSACRE:
On December 6, 1989 the largest mass murder in Canadian history was committed by one Marc Lepine at the École Polytechnique in Montréal. The final toll was 14 dead, all of them women, and 14 others wounded. For full details of the event and the controversies that surround it see the wikipedia article on what happened. In sum Lepine was the son of a French Canadian woman and an immigrant who later deserted his family, but not before laying a full set of beatings on young Marc. As he grew up and experienced failure after failure Lepine searched for someone or something to lay the blame on for his personal failings. He settled on "feminism" and "feminists".
To say this was off the wall is a great understatement. He had been rejected in an application to join the Canadian Army in the winter of 1980-81 because he was "anti-social". His sex had little to do with it. This sort of preemptive "psycho-discharge" meant that he could not even be trusted to kill the people that someone else told him to kill and was highly likely to turn his gun on his own side. His academic career was undistinguished, to say the least, but in his mind he was able to blame feminism for his failure. The idea that he was also considerably less able than most males simply couldn't be entertained in his mind.
Like most events of this nature everybody ended up having a dog in the fight. The events were fodder for calls for further gun control, for banning violence in the media, for liberals and social democrats decrying poverty, for conservatives decrying the breakdown of traditional morality, for advocates of social work saying that it pointed to the need for more head shrinking, for feminists saying it was the inevitable outcome of a culture of violence against women. The latter probably had the most validity, but in a way that its advocates hardly ever stated directly. Quite simply Lepine was your average accident waiting to happen. He was definitely not an elected representative of all men carrying out an attack on women, even if he thought he was in his twisted mind. Lepine was actually an orthodox follower of the idea of "collective guilt" that all too many feminists held, and hold today. This idea is hardly restricted to feminism. It is pervasive amongst the "left" and even the right. It has been described elsewhere as "the culture of resentment". If you want you can take left wing screeds, change the words denoting the villains and voila!! you have a resentful screed from the sort of neo-conservatives who publish in outfits such as Sun Media. You can work in the opposite direction as well.
Where does this go wrong ? Few outside of the steadily decreasing strongholds of religious fundamentalism doubt today that the general goals of feminism are laudable and necessary. The problem comes with abstract thinking. It is all too easy to take abstract categories and do a mental calculus with them that is totally divorced from the real world. Far too many feminist have done this in the past. No...all men are not rapists. No...all men are not violent to women. The problem comes when you surrender to the temptation to make an ideology out of practical problems rather than finding solutions to said problems.
The problem of violence against women is a real problem that calls for real solutions. Eugene Plawiuk over at the La Revue Gauche has laid out a list of what this problem means in his post on the significance of this day. The day has also become the occasion for an annual 'National Day of Remembrance and Action on Violence Against Women' in Canada. There is still much to do on this matter. What should be avoided, however, is turning this necessary struggle into the occasion for ideological rhetoric and cult building. To do this is to imitate the murderer, to build a monument to Marc Lepine and his sick way of thinking, not to the victims of his crime.
Posted by mollymew at 5:06 PM