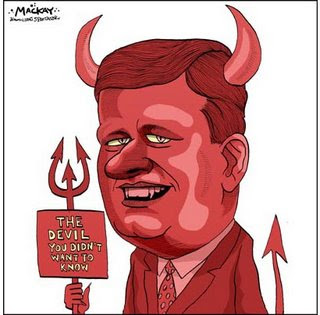 CANADIAN POLITICS:
CONSERVATIVE LIES:
Molly has been kicking this dog before. The following article from The Harper Index is almost 10 days old, but it is still topical despite the lull in Canada's present political scene. As has been mentioned before Sneaky Stevie decided to whip up public opinion against the NDP-Liberal coalition option by draping himself in the Canadian flag, as a "barrier to separatism".

To say the least it wasn't exactly that way at all, and Molly has mentioned previous dealings of the Conservative Party and their previous incarnation as the Reform/Alliance party with the Bloc Québeçois on this blog. Here's a little fleshing out of the details on one such incident.
..........................
Lies and name-calling blow up on Conservatives:
Separatist-bashing could undo all Harper's efforts to win Quebec over.
by Ish Theilheimer
OTTAWA, December 3, 2008: The Harper Conservatives got caught up today in their own bashing of Quebec sovereignists. Not a single government member missed a chance to denounce the "separatist coalition", as the Conservatives mockingly term the proposed Liberal-NDP coalition that would govern with the support of the Bloc Québécois (BQ).

This tactic blew up in the government's face when the Bloc circulated a draft agreement, from 2000, that it made with the Canadian Alliance Party, led by Canada's current trade minister Stockwell Day.

Day, who has been one of the most vocal critics of the Liberal-NDP coalition, angrily denied that he had anything to do with any such deal. "It would be against my very DNA(For a fundamentalist who imagines that the world was created 6,000 years ago this sort of statement doesn't mean much-MOLLY) to do a coalition deal with socialists, and it would absolutely go against my heart and the heart of Canadians to do a deal with separatists," he told the House on Wednesday.

The printed evidence circulated by the Bloc was damning, however. It included both the text of the agreement and a Globe and Mail article from July 29, 2000. It reported that "Canadian Alliance Leader Stockwell Day refused yesterday to rule out forming a post-election coalition with the separatist Bloc Québécois..."

CBC News reported that in July 2000, "Day indicated a willingness to form political ties with the Bloc if it meant ousting the federal Liberals from power. He said his party's position was 'to be open to anybody who's interested in a truly conservative form of government.' ... 'I'm not big on labels,' Day told reporters at the time when asked about a possible coalition to oust Chrétien's Liberals."

This evidence made Day's categorical denials unbelievable, and undermined the Conservatives' main argument, that the Liberals and NDP have betrayed Canada by dealing with the Bloc.

"They're always using us to throw names at one another," shrugged Bloc leader Gilles Duceppe. "That's their problem, not ours." The problem could grow especially acute for Conservatives, if all their separatist-bashing turns Quebeckers permanently against them, after Harper has worked so hard to attract them.

Former NDP leader Ed Broadbent, who helped engineer the coalition pact, is shocked by the number of untruths being told by the Conservatives. He told CBC News in an interview posted on YouTube, "I've never seen the leader of the Conservative Party lie the way Mr. Harper has."
Conservative lies that he listed included saying that: - there was no Canadian flag in the backdrop of the coalition-signing ceremony when, in fact, there were two; - the Bloc is part of the coalition; and - the coalition agreement included Senate appointment for Bloc members.

"They make it up," said Broadbent. "They're trying to change a serious economic situation into a political crisis."

The Bloc, he notes, supported votes of confidence for Harper 14 times.

Broadbent emphasized the importance of focusing on the main goal of the coalition, which is to take quick and decisive action to address the economic crisis by investing in infrastructure and environmental protection.
Posted by mollymew at 11:30 AM