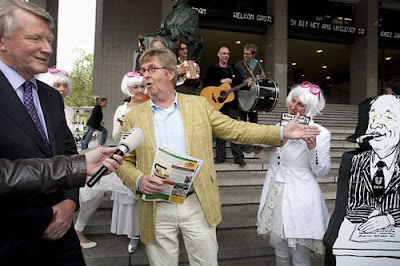 INTERNATIONAL LABOUR-PAKISTAN/EUROPE:
The international union federation, the IUF, has long been campaigning for decent working conditions and wages for workers employed by the Unilever multinational in Pakistan and India. This year they turned out for the annual Unilever shareholders' meeting in Rotterdam, the Netherlands. Here is the story as told by the IUF.
WWWWWWWWWW
'Adding Insecurity to Life': Dutch Unions Challenge Unilever Shareholders on Repressive Employment Practices Behind CSR Spin:
Posted to the IUF website 18-May-2009
Share this article.
The Dutch national center FNV and the IUF-affiliated FNV Bondgenoten turned out in force for Unilever's May 14 annual shareholder meeting in Rotterdam, highlighting the squalid social practices behind the company's well-polished "corporate social responsibility" public relations spin.

Unilever workers and support groups were massed at the two meeting entrances, handing out campaign material in support of the IUF's Unilever Pakistan campaign and the newly published "Erratum - Adding Insecurity to Life", an 'alternative annual report' contrasting Unilever practices with the empty claims of the slick company report and massive advertising. Published with the support of the FNV/ Bondgenoten, the UK TUC and Unite and the India Committee of the Netherlands, "Erratum" (available here as a pdf download in English from the FNV website ) makes extensive use of published IUF materials on the systemic abuse of casual labour and union busting in Pakistan but also reports on social conditions on Indian tea plantations supplying to Unilever as well as the company's environmental devastation and mercury poisoning at the site of its former thermometer factory in Kodiakanal, India, among other issues. For the first time, unions forcefully presented evidence to shareholders of massive corporate social irresponsibility at Unilever, prompting awkward questions from the floor. The action, which was accompanied by music and street theater, compelled Unilever corporate management to meet with an IUF/FNV delegation and received wide coverage in the Dutch media.

For the previous day's meeting of Unilever PLC shareholders in London, the IUF-affiliated Unite issued a press release in support of the Pakistan workers' fight for direct, permanent employment.

The latest news from the IUF's campaign for decent work at Unilever Pakistan are available on the Casual-T and LUXurious profits web pages.
WWWWWWWWWW
Here, also from the IUF, is more on these workers and their struggles, as well as a online petition that you can sign in their support.
WWWWWWWWWW
DECENT WORK NOT DISPOSABLE JOBS:
In 2007, nearly 300 workers at the Unilever factory in Rahim Yar Khan, Pakistan, after struggling for years to feed themselves and their families on "temporary" contracts, sought permanent employment status and union membership. They were fired in the presence of armed policemen and Elite Troops - and instantly replaced with contract workers performing identical tasks. With the support of the IUF and the National Federation of Food, Beverage and Tobacco Workers, they formed an Action Committee to fight for full reinstatement as directly employed, permanent workers. Their fight for justice continues - and needs your support.

The Unilever workers in Rahim Yar Khan, Pakistan make some of the company's leading billion dollar "global brands", including Lux and Sunsilk products. These brands, according to Unilever, "are the pulse and heartbeat" of the people of Pakistan. Yet for decades, the company has paid them with the steady destruction of permanent, direct employment. At the plan 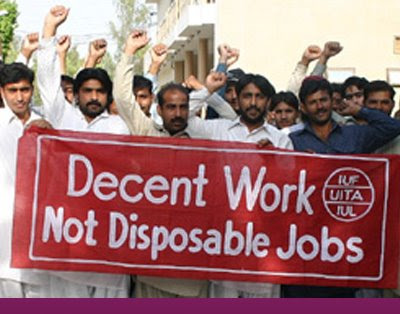 t today there are a small, steadily shrinking group of 145 permanent workers, and some 500 casual workers supplied by dozens of contractors.

Unilever's web site tells us that "The company operates through 4 regional offices, as well as 4 wholly owned and 6 third party manufacturing sites across Pakistan." Hugely profitable Unilever Pakistan claims to have thousands of employees, but the reality is that the company has only 314 employees on direct, permanent contracts in its entire country-wide operation. Unilever has been waging a relentless war on permanent employment, and now relies on a vicious system of disposable jobs - agency workers who can be sent home if there is no work, receive a poverty wage, and enjoy no pension or other benefits. Agency workers can't join a union of Unilever employees, because formally they are not employed by Unilever.

In 2007, a group of 292 "temporary" workers at the Rahim Yar Khan factory challenged the system of disposable jobs. They demanded the right to permanent, direct employment.

These temporary workers had been hired directly by Unilever on renewable 9-month contracts - and should have been made permanent after 9 months of continuous employment, according to Pakistan law. Most of them had worked at Rahim Yar Khan for years. The workers sought membership in the union which helped them fight for their legal right to permanent employment, including filing dozens of cases in the labour court.

Unilever responded by militarizing the plant, filling it with armed police and Elite Troops. The temporary workers were forced to sign their termination letters in the presence of armed police. Within 24 hours, they were replaced by agency contract workers.

Despite the severe difficulties and risks of fighting Unilever in a town it dominates, the dismissed temporary workers bravely continue their fight for justice. They are fighting for the rights and dignity of casual, abused precarious workers everywhere.

Support the Lux workers' struggle for justice and an end to disposable jobs - click here to send a message to Unilever:
WWWWWWWWWW
New Management Tricks to Block Negotiation over Mass Firings at Unilever Pakistan:
In 2007, nearly 300 workers at the Unilever factory in Rahim Yar Khan, Pakistan, after struggling for years to feed themselves and their families on "temporary" contracts, sought permanent employment status and union membership. They were fired in the presence of armed policemen and Elite Troops - and instantly replaced with contract workers performing identical tasks. With the support of the IUF and the National Federation of Food, Beverage and Tobacco Workers, they formed an Action Committee to fight for full reinstatement as directly employed, permanent workers with the right to join the union. Read more.
WWWWWWWWWW
No Vacancy' Defense of Disposable Jobs Regime Designed to Block Negotiation:
To support the Rahim Yar Khan Lux workers' fight for justice, the IUF filed a complaint with the OECD, whose Guidelines for transnational companies include adherence to ILO Conventions on the right of workers to organize trade unions and bargain collectively with employers. For a year-and-a-half, Unilever corporate management strongly resisted negotiating a solution to the conflict. Now that negotiations are at last supposed to be proceeding under auspices of the UK government, the company has taken to reshuffling the plant operations in order to thwart the negotiation process. Read more.
WWWWWWWWWW
THE LETTER:
Please go to THIS LINK to send the following letter to Unilever management.
WWWWWWWWWW
I am outraged to learn that 287 workers on temporary contracts at the Rahim Yar Khan factory were fired in October 2007 in the presence of armed police and Elite Troops for seeking to regularize their employment status in conformity with the law, and that they were immediately replaced by casual workers performing the same tasks supplied by a labour contract agency. Shame! Unilever must engage in immediate good faith negotiations with the IUF to ensure that these workers are unconditionally reinstated as permanent, direct employees.
Yours sincerely
Posted by mollymew at 9:52 PM

I visited several websites except the audio feature for audio songs existing at this website is
in fact marvelous.
Feel free to surf my blog - http://www.yourtobaccosstore.com/

I know this if off topic but I'm looking into starting my own blog and was curious what all is needed to get setup? I'm assuming having a blog like yours would cost a pretty penny?
I'm not very web savvy so I'm not 100% sure. Any suggestions or advice would be greatly appreciated. Thank you
My page ; acne overnight fast

Great blog here! Additionally your web site quite a
bit up fast! What web host are you the usage of? Can I am getting your associate link in your host?
I wish my web site loaded up as quickly as yours lol
Here is my web blog : http://asuntoturkista.net

I'm really enjoying the design and layout of your blog. It's a very easy on the eyes which makes it much more enjoyable for me to come here and visit more often.
Did you hire out a designer to create your theme?
Exceptional work!
Also see my web site > saukaynarca.com