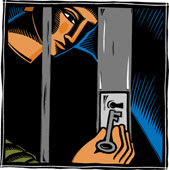 INTERNATIONAL LABOUR-IRAN:
FREE THE MAYDAY DETAINEES:
Recent may day gatherings in the Islamic Republic of Iran were marred by state repression and over 150 arrests. Over 100 of these people are still being detained. Here, via the online labour solidarity site Labour Start, is a call from the International Alliance in Support of Workers in Iran. (IASWI) for support of those still in prison.
IIIIIIIIIIIIII
Iran: A Call for the International Campaign to Free May Day Detainees:

Workers and labour organizations in Iran and all over the world!

On May First, the International Workers’ Day, many workers and their families assembled in Laleh Park of Tehran in response to the May Day Organizing Committee (consisting of independent labour organizations in Iran). People gathered to present their demands and to commemorate the May Day; however, they as well as other visitors of the park were violently attacked by the security-intelligence forces and plain-clothes agents. These forces used all kinds of tools and equipments to assault people, as the result of which many got severely injured and more than 150 people while being beaten were taken to custody. At this time, about 100 of the above are still incarcerated.

The people who were so brutally beaten and arrested had not committed any crime. They were repressed because they wanted to commemorate their international day, along with billions of other workers around the world, and put forward the demands of million of working people of Iran. They are being oppressed because of their efforts to form independent organizations. Many of them just like thousand other workers in Iran have not been paid for months. They are now in such unbearable situation only because they raised their protest voice together.

Everyday, the families of the May Day detainees have been gathering outside courts and judicial offices but they have been badly treated and never received a clear answer from the judicial authorities. We, millions of workers and toilers and egalitarians, are responsible towards our imprisoned colleagues and their families and must not leave them on their own. We have to engage in united and immense efforts for the freedom of all prisoners.

We therefore launch a campaign for the freedom of May Day detainees and call on all workers’ and human rights’ organizations in Iran and internationally to denounce these arrests, demand unconditional freedom of all detainees and support the legitimate demands of workers in Iran, which was stipulated in their 2009 (1388) May Day resolution. All concerned organizations and individuals are urgently requested to take any necessary and possible measures, depending on their capacity, in support of the May Day detainees.

LONG LIVE CLASS SOLIDARITY OF WORKERS OF THE WORLD

Please send the report of your actions, statements and solidarity messages to campain1may@gmail.com .

Supported by:
The Electrical & Metal Workers' Trade Association in Kermanshah, The Association in Support of the Sacked Workers of Saqhez, The Committee in Defence of Haft Tapeh Workers, Workers of The Parris textile Factory in Sanandaj, Workers of the Shin Baft Spinning and Textile Factory in Sanandaj, Workers of Shahoo, Sanandaj Textile, Gharb Baft, Ajor Shil, Shir Paak Araa, Gunnny Baafi (Gunny Making) Sama, Fajr Flour and Nirou Rakhsh factories, Service workers of Sanandaj’s Tohid Hospital, A group of Retired Workers of Sanandaj, Workers of Farsh Gharb Company in Kermanshah, Dena Laastic (Rubber), A group of workers of Ghaa-en Cement, A group of Workers of Aslavieh …
(more names to be added)
IIIIIIIIIIIIII
A sample letter:
Here is the sample letter that the IASWI has presented for the use of supporters earlier this May. It can still be used, modified as the most recent facts, to send to Iranian authorities at this later date.
IIIIIIIIIIIIII
Sample protest letter: Protest against repression of May Day Events in Iran:
Send your protest letters to:


According to the May Day Organizing Committee in Tehran, the May Day rally and celebration in Tehran, which was organized by independent Iranian labour organizations in Laleh Park, on May 1st, 2009, was violently attacked by security and intelligence forces and many were beaten and over 150 people arrested. The intelligence forces brutally attacked the event’s participants including women and children, by baton and tear gas etc., and forced hundreds of people out of the park. May Day rallies in City of Sanandaj, amongst others, were also attacked by security forces and plain clothes officers and many were beaten and arrested.

Five days after the May Day police crackdown, about 130 women and men are still incarcerated. They are detained in unacceptable conditions in section 204 of Tehran’s Evin Prison.

We condemn these attacks on workers’ rights to organize and celebrate May Day events. We are asking for the immediate and unconditional freedom of all May Day detainees. We also demand that the government to respect workers’ rights to organize, assemble and strike, put an end to persecution of labour activists, free all jailed workers and not to interfere in the affairs of independent workers’ organizations.

You can also send your protest letters to the Iranian Embassy in your country: click: http://www.worldembassyinformation.com/iran-embassy/index.html
Posted by mollymew at 8:53 PM