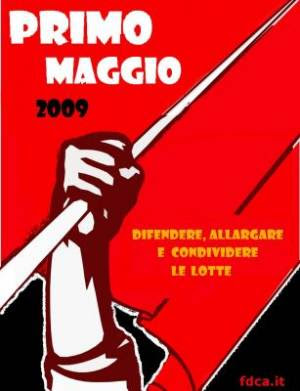 INTERNATIONAL ANARCHIST MOVEMENT:
ANARCHIST COMMUNIST STATEMENT ON MAY DAY:
The following, from the Anarkismo website, is the joint statement of five platformist organizations from three different continents on what may day means to them.
@@@@@@@@@@@@
May Day: Defend, Widen and Share the Struggle:
Translated version in Italiano Ελληνικά
Anarchist Communist May Day statement

May Day: Defend, Widen and Share the Struggle
Today as in the past, May Day means respect for mobilizations throughout the world by workers who suffer, at times even paying with their lives, for the sake of their struggles to improve the condition of men and women who labour under the control of capitalism.
As anarchist communists, we support the struggle for a radical change to a society of freedom, equality and solidarity, but we do not forget that in many countries, workers do not even have the most basic possibility to organise into unions, and many work in subhuman conditions for subhuman pay. Our thoughts today go to these workers, as we seek to strengthen the networks of support for the struggles of all the peoples of the world.
In Western countries, the 'cradle of freedom', the fate of working men and women has grown worse over the last two decades: casualisation, flexibility, magic words adopted by the Left as well as the Right, whose effects are now plain for everyone to see in the harsh effects of a crisis which grew out of lower wages and the destruction of jobs.
Everywhere one can see the difficulties of finding work, the increase in the use of blackmail against anyone who tries to organise political and social opposition, the growing insecurity for the future of the young and the not so young. And yet despite all this, profits are growing, financial mafias are infiltrating all areas, and it is increasingly difficult to carry out union and political activity with the aim of effecting real change.
The choice of States and the leaders of the G20 is repression, oppression and exploitation. Their first choice is to rescue the banks and the businesses. The workers can expect nothing, and in the meantime have to resort to getting into debt in order to survive.
But even in the hard times of a crisis, May Day continues to remind us that the only way to win rights is through struggle by the workers, self-organised and federated. But what we win is not won forever.
Our gains must be defended, widened and shared through more struggles.
The mobilizations throughout the world over the last few months of crisis serve to remind us that mass struggle, from below, self-managed, is in the workers' blood, in their historical memory, and stands in opposition to the leaders of international capitalism and the governments of the whole world in the name of social justice and the defence of the material interests of the world of labour.
It is the task of anarchist communists and revolutionaries to protect this memory and ensure that it remains a part of today's struggles, as an active force which is part and parcel of the workers' movement, a movement which must become a real revolutionary force capable of destroying capitalism and ushering in a new age of freedom, equality and solidarity.
1st May 2009
Alternative Libertaire (France)
Federazione dei Comunisti Anarchici (Italy)
Workers Solidarity Movement (Ireland)
Zabalaza Anarchist Communist Front (South Africa)
Common Cause (Canada)
Related Link: http://www.anarkismo.net
Posted by mollymew at 6:07 PM