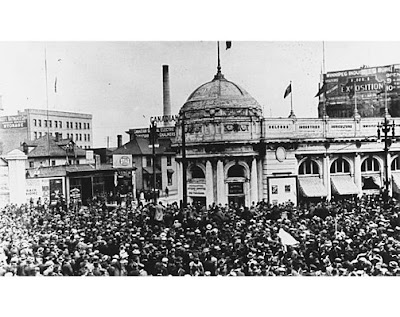 LOCAL EVENTS-WINNIPEG:
THE NOTORIOUS MRS. ARMSTRONG:
Coming up this Thursday, May 14, at the Cinematheque...the docudrama of Helen Armstrong, one of the heroines of the 1919 Winnipeg General Strike. For more on H.A. see THIS, THIS and THIS.
WWWWWWWWWW
Thursday May 14
Film Screening: The Notorious Mrs. Armstrong:
The Notorious Mrs. Armstrong, directed by Paula Kelly, follows the political career of a lesser known yet extremely important figure in Canadian history, Helen Armstrong. Helen was one of the organizers of the historic 1919 Winnipeg General Strike, which saw 35,000 workers on the picket line for six weeks, until it ended in the confrontation known as Bloody Saturday. Armstrong's continued actions as a union organizer helped persuade the government of Manitoba to institute the Minimum Wage Act and give livable wages to women.
7:00 pm, Cinematheque, 100 Arthur St. (Artspace Bldg.)
Posted by mollymew at 7:03 PM