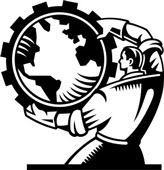 INTERNATIONAL LABOUR-PHILIPPINES/CANADA:
CANADIAN TOUR OF FILIPINO LABOUR ACTIVISTS:
The following item is from the Canadian Union of Public Employees (CUPE), and it's about a country wide tour of Filipino labour activists sponsored by CUPE's Global Justice Fund.
LLLLLLLLLLLL
Philippines ‘another Colombia’ for murdered union activists:
BURNABY—Thanks to the Canada-Colombia free trade agreement, not to mention CUPE’s international solidarity projects over the years, most union members today are well aware of the climate of fear and intimidation that haunts every union activist in the South American country.
But human rights abuses, including the murder or disappearance of trade union leaders, may be just as bad—or even worse—in the Philippines, according to a leading Filipino union activist who is touring Canada this month.
Antonio Tinio, national chairperson of the Alliance of Concerned Teachers (ACT), paid a visit to CUPE’s B.C. regional office on Monday, May 11 to share his experiences with CUPE members and staff. Tinio, and another Filipino union activist scheduled to arrive in B.C. on May 14, were on a national tour sponsored by CUPE National’s Global Justice fund.
Privatization gone mad
The portrait Tinio painted of President Gloria Macapagal Arroyo’s administration was one of unbridled privatization in which Filipino workers’ rights are trampled for the sake of maximum foreign investment.
The struggle is especially desperate in the education sector, where tuition fees at the University of the Philippines went up 300 per cent last year alone.
“The slashing of higher education budgets for universities and colleges, and the outsourcing of such services as security, janitorial and food, has been a trend since the Asian financial crisis of the late 1990s,” Tinio told the CUPE gathering.
“This period has seen the linking of universities with big corporations. The U of P has leased a lot of land to corporations, and we’re seeing a lot of call centres and business outsourcing within the campus.”
In response to Arroyo’s freeze of school teachers’ wages, union activists are also campaigning to raise those salaries by 75 per cent over three years.
A policy drenched in blood
Between 2001, when Arroyo first came to power, and March 2009, 1,009 unionists and activists have been killed, while another 204 have been victims of “involuntary disappearances,” said Tinio.
“The activists who have been killed come from organized labour, peasant organizations, women, human rights, students, teachers, and other professional organizations.”
The ACT leader said that Arroyo regime has failed to institute substantive reforms recommended two years ago by United Nations’ special rapporteur Philip Alston to put a stop to extrajudicial killings in the Philippines.
This verdict was released just a few days ago by Alston himself, providing an update.
Alston’s 2007 report concluded that activists were being targeted by the nation’s military forces.The deaths of three ACT members since the mid-decade have been particularly chilling. One woman, a college professor, was stabbed in 2005, while a male teacher was shot by masked gunmen in 2006 as he was walking home from school. In 2007, a teacher was shot dead in front of his students.
In another case, a 22-year-old substitute teacher was shot dead because she was believed to be the daughter of a rebel leader.
International support makes a difference
Notwithstanding the lack of political reform, Tinio told the CUPE gathering that international pressure on the Arroyo government has gone some way to help reduce the killings and disappearances. Since 2006, an avalanche of e-mails and letters has called for the government to stop the killings, end impunity for the murderers, and support human rights. Since 2006, the numbers have gone from 220 recorded cases of murdered unionists to 94 in 2007 and 64 in 2008.
Tinio concluded that Canadian unionists can help by passing convention resolutions to support ACT’s campaign, by establishing worker-to-worker solidarity missions with the Philippines, and by writing to the Arroyo and Harper governments to demand justice for the victims of extrajudicial killings.
Tinio also hopes to produce a video documentary on human and labour rights in the Philippines, and is soliciting funds for the project.
To contribute to the ACT campaign, visit the Global Justice Fund
Posted by mollymew at 3:30 PM