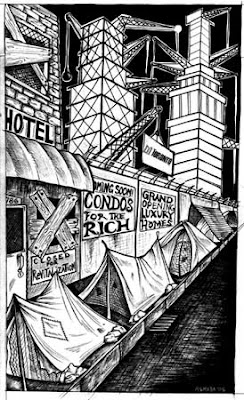 CANADIAN POLITICS-ONTARIO:
KEEP PUBLIC HOUSING:
The following notice of a demonstration on Saturday, May 23, is from the Ontario Coalition Against Poverty (OCAP).
DDDDDDDDDDDD
May 23 - Decent, Affordable, Accessible Housing For All‏:
Decent, affordable, accessible housing for all
Stop the sell-off of public housing.
May 23
11:30 am
13 Trefann Street (north of Queen, just east of Parliament)
Free Meal

The Ontario Coalition Against Poverty, TCHC (Toronto Community Housing Corporation) tenants, people on the TCHC waiting list and supporters will meet outside of one of the houses slated to be sold by TCHC to demand it and all TCHC units remain public housing.

TCHC is quietly proposing to sell-off 326 apartment units and 45 single family homes that are located in sought-after neighbourhoods, primarily downtown and in the Beaches. Many large families are living in two bedroom apartments, waiting for larger units, while TCHC is emptying select units in an attempt to to sell-off its prime real estate. These sales (and the City's displacement of poor people through “redevelopment”) means that many TCHC residents are being displaced from their schools, friends and communities - neighbourhoods that many residents have lived in for years.

TCHC says that the units up for sale are in such a state of disrepair that they cannot be fixed. We have seen many of the units and it is a boldfaced lie! Further, the units that are in really bad repair were purposely not kept up by TCHC so that they could sell the units off down the road and use their dilapidation as an excuse. Public housing can be updated and revitalized without selling the land, forcing people from their homes and displacing entire communities.
We Demand:
*Build housing, don't sell it!
*Repair, don’t redevelop!
*Don’t Ask, Don’t Tell!
*Stop the “Redevelopment” of Our Neighbourhoods

Currently, there are six large housing projects undergoing or slated for redevelopment. This redevelopment is being promoted as an improvement to TCHC communities. Specifically, the city argues that the so called “mixed communities” will improve the lives of poor people. The truth however is, that this is an excuse to take away poor people's homes that have high property values. The City isn't demanding that Rosedale be turned into a 'mixed neighbourhood' – just the places where poor people live.
Further,over time, these rebuilt communities will become gentrified; we can expect TCHC to rent more of the units at market value, pushing poor people out.
Ensure that Enough Social, Supportive and Accessible Housing is Built to Eliminate the Waiting List
Over 70,000 households are waiting to get into social housing. It takes about 5 years to get a tiny bachelor unit in Toronto Community Housing Corporation (TCHC) and about 10 years to get anything else. Thousands of people are working multiple jobs, going hungry, and living in rotten conditions while they wait. Thousands of homeless people pack into shelters or sleep on the streets every night because no supportive housing is available. Accessible housing for disabled people is very hard to find and is often extremely expensive.
As the economic crisis continues, this situation will get even worse. We need more housing and we need it now!
Repair TCHC Units
Nearly 60,000 units of public housing in Toronto are being allowed to deteriorate. TCHC admits that $300 million worth of repairs is needed to bring their buildings up to a minimum legal standard. People are forced to live with gaping holes, leaking ceilings, exposed pipes, peeling paint,electrical sockets that spark and infestations of rats, mice and bedbugs.This is unacceptable, this is illegal and it has to stop!
Don't Ask Don't Tell
People without immigration status are especially marginalized in our city. People without status are forced into precarious housing, unable to access safe, decent paying work and shut out from public services. There are over 500,000 people living without status across Canada, many of whom live in Toronto. A person without status is not eligible to apply for Toronto Community Housing. Further, if a family, living in housing, has even one family member without status that entire family will be evicted.
We demand the city implement a Don’t Ask Don’t Tell policy. This policy would prevent all TCHC workers from asking people what their immigration status is, from refusing housing to people without status and from sharing that information with immigration authorities.
Posted by mollymew at 7:47 AM