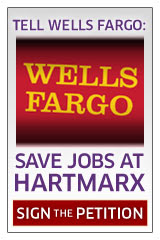 AMERICAN LABOUR:
HELP SAVE HARTMARX JOBS:
The following appeal from the Service Employees International Union (SEIU) definitely has potential. It seems that Wells Fargo, one of the beneficiaries of the recent free money (bailouts) from the US Treasury has been nowhere near as forgiving with its own debtors. Par for the course I guess. What makes the matter interesting, however, is the following. One is that the company, Hartmarx (yes ! that is the name) is one that makes President Obama's suits. The other is that the workers involved have threatened to stage a factory occupation if their jobs are not saved. They have been no doubt inspired by the recently victorious factory occupation at Republic Windows and Doors in their city.One wonders about the conniptions this may be creating in Washington as they weigh their various options. Here is the article asking you for online solidarity with these workers.
WWWWWWWWWW
Bailed out bank wants to bail on union workers:‏
The public gave Wells Fargo $25 billion in bailout funds, but rather than investing that money in American jobs by keeping credit flowing, Wells Fargo is considering cutting the cord.
1,000 workers at Hartmarx, the Chicago-based apparel company that makes President Obama's suits, may lose their jobs if Wells Fargo forces the company to liquidate. Two of the bidders on the manufacturer have said that they see the value in continuing the production of top quality suits and will keep the plant open and a third bidder wants to liquidate.
These Hartmarx workers are members of Workers United, SEIU's newest affiliate.
Please take a moment to sign a letter to Wells Fargo Executive Vice President John Stumpf asking him to choose a bidder who will save these jobs. We'll make sure the letter is delivered with your signature and keep you updated on the situation.
http://action.seiu.org/page/m2/18a1e56d/165dd20/5a89ca52/ce67296/388944281/VEsE/
Yesterday, workers at Hartmarx voted in favor of a "sit in," which means that if Wells Fargo or a buyer tries to close the factory, the workers will remain at their job site.
These workers are taking a stand not just for their own jobs for all workers jeopardized by shortsighted banks.
Please co-sign the letter to Wells Fargo right now.
http://action.seiu.org/page/m2/18a1e56d/165dd20/5a89ca52/ce67296/388944281/VEsF/
The predecessor unions of Workers United like the ILGWU (remember "look for the union label") have represented Hartmarx employees for almost a hundred years. I'm proud to ask you to join me in standing with them today.
In Solidarity,
Andy Stern
WWWWWWWWWW
THE PETITION:
Please go to THIS LINK to sign the following online petition.
WWWWWWWWWW
Dear Mr. Stumpf,
The American people gave Wells Fargo 25 billion in TARP Funds. Now we are asking you to do the least you can do in return -- keep the Hart, Schaffner and Marx apparel company open by accepting one of the two bidders on the company that plans to keep the factory open.
Forcing the liquidation of American jobs is the last thing our economy needs right now. Wells Fargo has an obligation to shareholders, investors and public to take a longer term view of the economics, that means keeping jobs and supporting this profitable business. I urge you to do the right thing.
[your signature will go here]
Posted by mollymew at 9:59 PM