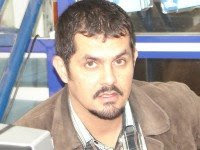 INTERNATIONAL LABOUR-ALGERIA:
SOLIDARITY WITH YASSIN ZAID:
In the sands of the Sahara workers toil under horrendous conditions to satisfy the insatiable demands of empires and would-be empires. Despite the savage nature of the Algerian state workers in this situation try to improve their conditions as best they can by organizing. Quite often they are victimized for their efforts. The following from the online labour solidarity site Labour Start asks for your solidarity with one such worker.
LLLLLLLLLLLL
Tell Compass Group: To injure one of us is to injure all of us!:
In Hassi Messaoud, Algeria, an oil fortress located in the dunes, 850 kilometers south east of Algiers, Eurest Support Services, a subsidiary of Compass Group, sub-contracts catering and hospitality services to a score of multinationals like Schlumberger, Halliburton, Repsol, BP, Ciepsa, Burlington. Hundreds of miles away in prospecting camps, their employees live in air-conditioned temporary constructions, with telephone and distractions. ESS employees live in tents; under desert temperatures, and suffer difficult hygiene and living conditions. Shifts last 6 weeks without a day off. Monthly salary is on average 18.000 dinars (185 Euros). In December 2006, ESS workers decided to create a union to defend their dignity and to improve their working conditions. But an expatriate manager intervened to prevent them from doing so. The union's legitimacy was disputed; the constitutional meeting was refused on ESS property, local authority inspectors were ignored. In spite of an impressive initial support of 1,400 employees out of 1,800, the pressures, the intimidations, the constant renewal of personnel as well as the distance from the "civilized world" and organizational difficulties, allowed ESS management to get its wish. Compass then decided "to make an example" by suspending Yassin Zaid, elected General Secretary of the union, who refused to disavow his engagement. A former employee of the day, receiving bonuses for merit, his work contract was suspended. It still is. Compass Group and ESS pressed charges against him for "slander on the Internet". In support of the company, certain managers made complaints on unsupported grounds of "death threats by e-mail". For the last 18 months, his life destroyed, Yassin Zaid has lived in fear of further reprisals by Compass Group. The independent Algerian union SNAPAP denounces the anti-union practices of multinationals operating in their country. It has recently created a special section to support trade union initiatives in these companies. SNAPAP is requesting international solidarity to put pressure on Compass Group to abandon all legal proceedings against Yassin Zaid and negotiate his reinstatement in professional and union functions.
LLLLLLLLLLLL
THE LETTER:
Please go to THIS LINK to send the following message to management at Compass Group.
LLLLLLLLLLLL
To Mr. Richard Cousins, CEO Group Compass
Dear Mr. Cousins,
In December 2006, the direction of your subsidiary company, Eurest Support Services, in Algeria, denied its employees the right to constitute a union to defend and negotiate their collective interests. Your company chose to support management in its error and to make an individual, Yassin Zaid, shoulder the blame by suspending his work contract and by pressing various charges of slander, in particular on the Internet.
Your local management could have recognized the union and negotiated peacefully with its representatives for the better of all concerned. Instead of that, your actions have drawn the attention of the independent trade unions of Algeria to your anti-union policies and practices. The Algerian press is featuring articles on the same. From now on, the international trade union movement is alerted. Instead of crushing an incipient trade union, as your representatives thought they could, you have drawn the attention of the whole world to your anti-union practices. Workers, your customers, in all countries and on all continents are aware that your trademark is tarnished.I highly encourage you to abandon all legal proceedings against Mr. Yassin Zaid, elected Secretary of the union at ESS, Algeria, and to negotiate the conditions of his reinstatement in his professional and union functions.Lastly, I urge you to adopt on a planetary scale, not just declarations of intent, but a real policy of recognition of trade unions and of collective bargaining backed up by training for your local managers.
Yours Faithfully,
Posted by mollymew at 1:12 PM