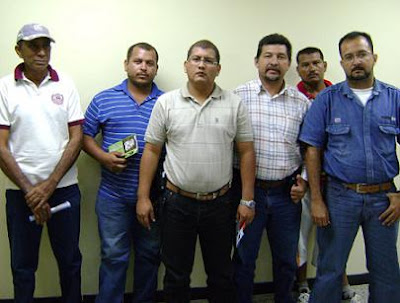 INTERNATIONAL LABOUR-VENEZUELA:
SENTENCES FOR THE SIDOR 14:
This is another item that has been all over the "anarcho-net". I have chosen to reprint the version in the Polish anarchism news service Centrum Informacji Anarchistczej . The original source is the Venezuelan anarchist magazine El Libertario.
The following is about yet another case of the so-called socialist government of Venezuela versus the workers of that country. To say the least this comes as no surprise to Molly, as she is very doubtful of the "good intentions" of a new ruling class such as the 'Boli Bourgeoise' (as they are called in Venezuela) whatever their ideological pronouncements. Self interest tends to weigh very heavy in the scale. The situation described below will undoubtedly reoccur time after time in the future, barring the end of the Peronist Chavez regime. The word "Peronist" is important in the previous sentence. Without going off the ideological deep end in describing the present regime in Venezuela as "fascist" it is very important to note that this regime stands in a long line of dirigiste populist movements in Latin America, of which the Peronist regime in Argentina was the original model, regimes that use the rhetoric of "popular power" to actually undermine any real attempt at such.