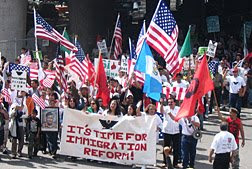 AMERICAN LABOUR:
THE VIRTUAL MAY DAY MARCH:
The clock is ticking, but May day isn't over yet. Here's an appeal from the US United Farm Workers to join what they call a "virtual march" for immigration reform in the USA.
LLLLLLLLLLLL
Join the virtual immigration march:
Today thousands across the country will march to demand that Congress do the right thing on immigration reform.
This issue is vital to the UFW and to the farm workers we represent. Farm workers do the hardest, most difficult jobs that others won't do. They help feed this nation. Yet, they are faced with fear and intimidation because many employers use the threat of deportation to keep on exploiting them.
Please join us in fighting for immigration reform by participating in a virtual May Day march that we are doing along with other immigration groups. Help us show Congress that there is a growing movement that stands with the President to pass real immigration reform this year.
It’s time to end this cycle of fear and abuse and achieve real change for working families. To do so, we need your help to move the campaign forward. Please take action today and join the virtual march.
LLLLLLLLLLLL
THE LETTER:
Please go to THIS LINK to send the following letter to the US Congress.
LLLLLLLLLLLL
I'm writing to voice my support for comprehensive immigration reform.
A Senate Judiciary hearing this week, is asking whether or not 2009 is the right time to move forward on comprehensive immigration reform.
It's time. We need to end this cycle of fear and abuse and achieve real change for working families.
As your constituent, I want you to know that I support the President's pledge to move on real reform this year. I hope that you will work with the White House to make sure it gets done.
We need real immigration reform, including a pathway to citizenship for the undocumented, smart enforcement against exploitative employers, and a better process for future immigration so families are not separated.
I ask you to work with the President to pass real immigration reform this year. I look forward to knowing where you stand on this issue.
Thank you,
Sincerely,
[Your name]
[Your address]
Posted by mollymew at 6:30 PM