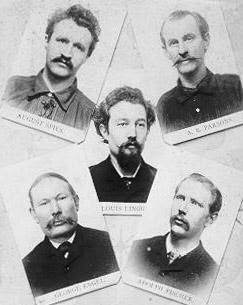 To understand why the state and business class were so determined to hang the Chicago Anarchists, it is necessary to realise they were considered the "leaders" of a massive radical union movement. In 1884, the Chicago Anarchists produced the world's first daily anarchist newspaper, the Chicagoer Arbeiter-Zeitung. This was written, read, owned and published by the German immigrant working class movement. The combined circulation of this daily plus a weekly (Vorbote) and a Sunday edition (Fackel) more than doubled, from 13,000 per issues in 1880 to 26,980 in 1886. Anarchist weekly papers existed for other ethnic groups as well (one English, one Bohemian and one Scandinavian). As Martyr Oscar Neebe clearly argued, "these are the crimes I have committed: I organised trade unions. I was for reduction of the hours of labour, and the education of the labouring man, and the re-establishment of 'Die Arbeiter Zeitung', the workingmen' paper."

Anarchists were very active in the Central Labour Union (which included the eleven largest unions in the city) and aimed to make it, in the words of Albert Parsons (one of the Martyrs), "the embryonic group of the future 'free society.'" The anarchists were also part of the International Working People's Association (also called the "Black International") which had representatives from 26 cities at its founding convention. The I.W.P.A. soon made headway among trade unions, especially in the mid-west and its ideas of direct action of the rank and file and of trade unions serving as the instrument of the working class for the complete destruction of capitalism and the nucleus for the formation of a new society became known as the "Chicago Idea" (an idea which later inspired the Industrial Workers of the World which was founded in Chicago in 1905).

This idea was expressed in the manifesto issued at the I.W.P.A.'s Pittsburgh Congress of 1883:
**"First -- Destruction of the existing class rule, by all means, i.e. by energetic, relentless, revolutionary and international action.
**"Second -- Establishment of a free society based upon co-operative organisation of production.
**"Third -- Free exchange of equivalent products by and between the productive organisations without commerce and profit-mongery.
**"Fourth -- Organisation of education on a secular, scientific and equal basis for both sexes.
**"Fifth -- Equal rights for all without distinction to sex or race.
**"Sixth -- Regulation of all public affairs by free contracts between autonomous (independent) communes and associations, resting on a federalistic basis."

In addition to their union organising, the Chicago anarchist movement also organised social societies, picnics, lectures, dances, libraries and a host of other activities. These all helped to forge a distinctly working-class revolutionary culture in the heart of the "American Dream." The threat to the ruling class and their system was too great to allow it to continue (particularly with memories of the vast uprising of labour in 1877 still fresh. As in 1886, that revolt was also meet by state violence). Hence the repression, kangaroo court, and the state murder of those the state and capitalist class considered "leaders" of the movement.

The Chicago anarchists, like all anarchists, were applying their ideas to the class struggle. They were forming unions organised and animated with the libertarian spirit. They saw that anarchism was not a utopian dream but rather a means of action -- of (to use Bakunin's words) "creating not only the ideas, but also the facts of the future itself" by means of direct action, solidarity and organising from the bottom up. That was why they were effective and why the state framed and murdered them.

On the 115th anniversary of the first May Day, we must apply our anarchist ideas to everyday life and the class struggle, inside and outside industry, in order to make anarchism a possibility. As Kropotkin put it, "anarchism was born among the people; and it will continue to be full of life and creative power only as long as it remains a thing of the people."

Reclaim the anarchist spirit of May Day. Make everyday an International Day of solidarity and direct action!
"I say to you: 'I despise you. I despise your order; your laws, your force-propped authority.' HANG ME FOR IT!"
Louis Lingg

"The existing economic system has placed on the markets for sale man's natural rights . . . A freeman is not for sale or for hire"
Albert Parsons

"You may pronounce the sentence upon me, honourable judge, but let the world know that in A.D. 1886, in the State of Illinois, eight men were sentenced to death because they believed in a better future; because they had not lost their faith in the ultimate victory of liberty and justice!"
August Spies

"every anarchist is a socialist but every socialist is not necessarily an anarchist . . . the communistic anarchists demand the abolition of political authority, the state . . . we advocate the communistic or co-operative methods of production." Adolph Fischer
Posted by mollymew at 7:01 PM