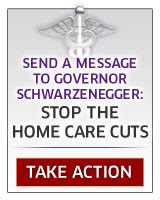 AMERICAN LABOUR:
THE TERMINATOR WIELDS AN AXE:
Arnie, Arnie, Arnie, how could you ? Seems that Governor Schwarzenegger of California wants to cut the wages of home care workers in that state down to $8/hour. This is less or equal to the minimum wage in many Canadian provinces. The Service Employees International Union (SEIU) is protesting these cuts, and they are asking you to add their voice to theirs. Here's the story and the appeal. Look out Arnie. "They'll be back".
LLLLLLLLLLLL
What happened when Gov. Schwarzenegger drove by?:‏
Earlier this week, thousands gathered outside the Capitol in Sacramento, California to protest the pending home care cuts.
As they listened to passionate pleas from pastors, workers and those who depend on their care, a limo drove by.
The car slowed and a backseat window rolled down ... A smug, cigar-chomping failed Governor peered out at the crowd.And when Governor Schwarzenegger looked, he was immediately met by chants of "stop the cuts! stop the cuts!"
Check out pictures from the 48-hour vigil in Sacramento and send your personal message to Gov. Schwarzengger telling him not to cut home care for the most fragile among us
http://action.seiu.org/homecarerally
When he heard the chants, the governor's limo sped away.
But he can't run from the fact that his misguided priorities have propelled California to the edge of insolvency.
Now, the Governor wants to cut the pay of the workers who help seniors and people with disabilities stay in their homes down to $8 an hour. That could force thousands out of their own homes and into nursing homes, costing the state four times as much as in-home care!
Send a message to the Governor telling him his short-sighted policies will send California deeper into fiscal abyss.
http://action.seiu.org/homecarerally
We can win this fight, but it will take you lending a voice to the effort today.
Rock the boat,
Tim Tagaris
New Media Director,
SEIU
Posted by mollymew at 5:51 PM