CANADIAN ANARCHIST MOVEMENT-HAMILTON:
POLICE KEEPING A BEADY EYE ON THE HAMILTON ANARCHIST BOOKFAIR:
This one probably falls under the "unintentional comedy" heading. Here, from the website of the Ontario platformist organization Linchpin is their response to a recently released Hamilton police report. There is much more on this subject over at the Ontario section of the Anarchist Black Cat discussion board(see our Links section).


Now there is a lot to be said about anarchist bookfairs, some good and some bad. At least here in Canada the descriptive adjective would mostly be good. Down USA way, which actually has a far higher population of loons than we do of our national bird up here, the worst insult that could be directed -to a minority of the events- would be weird. But a "hate crimes" connection ? You gotta be kidding. No doubt occasional nutters of the fascist persuasion to sometimes try and exploit the overgrown tolerance of anarchists, but they are pretty well always rapidly shown the door, often in a less than gentle fashion. In any case they are inevitably outnumbered by about 50 to one by other people with strange hobby horses. Be an anarchist for say 10 years, and it is doubtful that you would meet any fascist trying to fish in the anarchist pool. Be an anarchist for one months, however, and you will inevitably meet several bizarros who want to "abolish civilization", amongst other strange ideas. That God that they don't constitute the majority.


The police report actually has all the earmarks of a police "anti-hate" project that has too little to do in the city of Hamilton. Ah, the Devil and idle hands. One gets a picture of some guy behind a desk waiting for months on end for a bit of graffiti on a wall or a knocked down tombstone. Waiting and waiting and waiting. In order to avoid their activities being seen as useless (with the frightening prospect of being assigned back to patrol duty in mind) this collection of officers has tried to assume everything that used to be the province of the 'Red Squad' under their aegis. Who knows maybe Red Squads have been deemed to be a piece of bad PR, and it may become a trend to rename them as "anti-hate" divisions while forgetting about what "hate crimes" are actually supposed to be.


Yup, some of my "comrades" can be right strange, but this little "learned report" from the Hamilton police shows that such weirdness can be exceeded by others. On to Linchpin's comments.
@@@@@@@@@@
FOR IMMEDIATE RELEASE:
Anarchists call Police report comparing activism to hate crime "chilling":
HAMILTON- Local members of the provincial anarchist organization Common Cause fear Hamilton police are seeking to criminalize local organizers after a Hamilton police report identified the 2nd annual Hamilton Anarchist Book Fair as a potential source of hate crime.
While presenting the Year-End Hate Crime report (available online)to the Hamilton Police Board on May 19, acting sergeant Michael Gochstated police would be “actively monitoring” the book fair scheduled to take place on June 6.
Alex Diceanu, Ontario Treasurer of Common Cause responded, "As the organizers of the annual book fair, and as local anarchists and activists, Common Cause is deeply disturbed by these statements.
"This is a manipulation of hate crime laws to criminalize activism. At this time of economic and environmental crisis, alongside increasing political disengagement, activism and educational events such as the book fair should be encouraged, not chilled with surveillance."
The report also identifies the 2010 G8 summit (Huntsville, ON), the 2010 Olympics, “local native land reclamation issues”, “the anarchist movement” and “anti-government and anti-establishment reaction of economic crisis and job losses” as trends and events that “may have significant impacts and repercussions on the Hamilton community in terms of hate/bias related incidents.”
For the first time the report also includes incidents of graffiti aimed at police even though this contradicts the report's own definition of a hate crime.
Diceanu commented, "We are concerned that public resources meant to investigate hate crimes are being focused upon people trying to improve this community."
The Hamilton Anarchist Book Fair is not a threat to the community.
It is open to the public and family-friendly, featuring free child care and a kid's workshop.
Over 300 people attended last year's book fair. Activists will gather again this year to exchange literature and other forms of information.
Workshops at the book fair attempt to address issues faced by marginalized groups named in hate crimes legislation, including indigenous peoples, racialized groups, people facing disability barriers and others. Other workshops address the economic crisis, environmental justice and workplace organizing.
"Common Cause's Basic Policy states clearly that, and I quote, 'we actively oppose all manifestations of oppression such as racism, sexism, [religious] sectarianism and homophobia and we struggle against them.'
Indeed, anarchists have always sought to understand and end all forms of oppression in our struggle to create a world marked by true equality, freedom, peace, and harmony with the natural environment" says Diceanu
The full police report is available here (look for the May 19 Hamilton Police Services Board Public Agenda package at the top of the page).
http://www.hamiltonpolice.on.ca/HPS/PoliceServicesBoard/
For more information please contact:
commoncauseontario@gmail.com
@@@@@@@@@@
But about the Hamilton Anarchist Bookfair itself, coming up soon, here, also from Linchpin, is the callout.
@@@@@@@@@@
2nd annual Hamilton Anarchist Book Fair, June 6:

For the second year in a row, Hamilton will be home to Ontario's only Anarchist Book Fair, happening June 6, from 10am to 4pm at Westdale Collegiate, 700 Main St. West . Over 300 people from all over southern Ontario took part in Hamilton's first anarchist book fair, held last June.
For those not familiar with anarchist book fairs you can expect a couple dozen or so publishers and book stores to be on hand offering literature in various forms (as well as the occasional t-shirt) at affordable prices. You can expect to find just about every social justice issue covered from the enviro 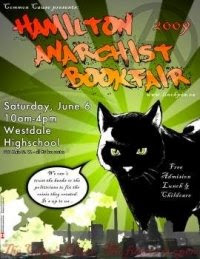 nment, to women's struggles to radical history and theory. Many local activist groups will also be on hand to share information about important struggles happening in our community and beyond.
You will also be able to attend a series of talks and workshops as you take a break from browsing books. Workshop topics include environmental justice, workplace organizing, Palestinian and First Nations struggles against colonialism, disability politics and more. A kids' workshop, organized by and for children, will also be held so parents are encouraged to bring along their little ones. Wayne Price, author of “The Abolition of the State: Anarchist and Marxist Perspectives” will feature as the key note speaker. He will be speaking on the current global economic crisis. For full details including a list of vendors and workshop descriptions please see the book fair's website at http://hamiltonanarchistbookfair.wordpress.com/vendors/
Admission is free. Lunch and child care will also be provided free of cost. The building is wheelchair accessible from the back parking lot.
The book fair is organized by the Hamilton branch of Ontario anarchist group, Common Cause. They can be contacted for more info at hamiltonanarchistbookfair@gmail.com.
Posted by mollymew at 10:39 PM

There is some humour in this no doubt (especially when the report lists a planned religious counter-summit in Winnipeg and Desmond Tutu as a potential source of hate crime, I shit you not. But Hamilton is in fact an incredibly racist and homophobic place with daily incidents. So the real scandal is that the Hate Crime Unit is wasting these resources acting as a Red Squad instead of investigating real hate crimes. It is a slap in the face to anyone who is a target of it.

oh, and the group is Common Cause, Linchpin is just the name of the site and newpaper. People are always mixing up the two.

Sorry about the confusion between Linchpin and Common Cause. an obvious error on my part, as I usually get it right. It would help my almost senile mind, however, if I started to type a link for Common Cause it didn't come out http://l..i..n..c..h..p..i..n.ca every time. That's about the best excuse I have for my post-midnight error in this case.
Sorry, I couldn't resist it. You are right to point out the error.