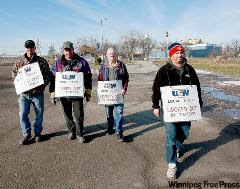 CANADIAN LABOUR-MANITOBA:
HELP MAKE CHRISTMAS IN PINE FALLS:
Since Sept 1 workers at the Tembec paper plant in Pine Falls, represented by Local 1- 1375 of the United Steelworkers and Local 1216 of the Canadian Office and professional Employees Union, have been locked out by their employer. Having no resources to fall back on many who can are already beginning to drift away from town in search of work. Still others will have to cancel Christmas for their families. People here in Manitoba are pulling together to help out, as the following column from Winnipeg Free Press reporter Lindor Reynolds shows. For those readers outside of Manitoba, the Goldeyes are our local baseball team. Also, the following article doesn't mention the mailing address of the Wings of Power Centre in Pine Falls where anyone from out of province who wishes to make a donation can mail a cheque. It is...
Wings of Power
39 Main St.
Pine Falls, MB
R0E 1Mo
Canada
or
Wings of Power
Box 66,
Pine Falls, MB
R0E 1M0
Canada.
Their website is http://www.wingsofpower.org and their facebook site is http://www.facebook.com/pages/Wings-of-Power/198769800444 . All donations are tax deductible (in Canada of course). Every Friday the Centre provides a free lunch for workers on the picket line. Here's the story from the Free Press.
WWWWWWWWWW
Christmas comes earlier and earlier each year.:
At Costco, it arrived in early October. There's something profoundly depressing about seeing an illuminated Santa weeks before the kids go trick and treating.
But we're only a few weeks away now so I thought I'd give you the gift of good news. Manitobans are knocking themselves out to help the needy, the less fortunate and the desperate.
"ö "ö "ö
We start in Pine Falls, where the locked-out Tembec workers are trying to find a way to pay their bills. Many have told their kids they shouldn't expect Christmas presents.
That didn't sit well with some of you.
I heard from Grant Tymchuk, owner of the Arby's locations in Winnipeg. He made an offer: For every new unwrapped toy dropped off at any Arby's, he'd provide the donor with a free combo meal.
Tymchuk went even further. He drove out to Pine Falls, met a number of folks on the picket line and came home impressed with their camaraderie.
Tymchuk called Monday to tell me the toys are coming in. He's also managed to get Mark's Work Warehouse to donate some warm winter clothing. The Goldeyes have also signed on with some goodies.
"ö "ö "ö
I got back from a short vacation Monday afternoon. My mail slot held cheques for the Tembec employees. I'm sure the Wings of Power family resource centre in Pine Falls received even more.
You know who you are. Thank you.
WWWWWWWWWW
MOLLY NOTE:
The Tembec workers cannot collect EI because they are locked out. Yeah, I know, I did a double take on that one as well. This despite the public promo on government sites that EI provides benefits for those who are umemployed "through no fault of their own". I think a lockout qualifies as very much such a situation. In any case I hope to be back to this EI issue in some future post.
Posted by mollymew at 10:47 AM