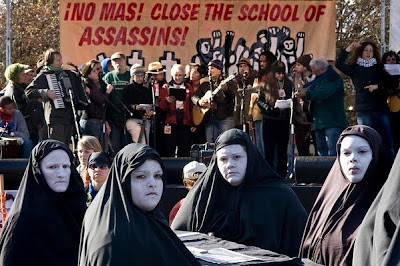 INTERNATIONAL HUMAN RIGHTS:
SCHOOL OF THE AMERICAS VIGIL THIS WEEKEND:
Every year protesters gather at the gates of Fort Benning, Georgia to protest the historical- and ongoing- use of the US Army training facility for Latin American army and police ie its role as a "school for torturers and assassins". This year will be no different. Here's the announcement from the School of the Americas Watch organization.
WWWWWWWWW
This Weekend: Join us at the Gates of Fort Benning, Georgia for the Mass Mobilization to Close the SOA and to Change U.S. Foreign Policy:
The movement to close the infamous "School of the Americas" will bring together thousands of human rights activists, torture survivors, veterans, faith-based communities, union workers, students, musicians and others from across the Americas for a Vigil, Rally, Funeral Procession and Nonviolent Direct Action to close the School of the Americas at Fort Benning, GA from November 20-22.
Organizers for justice in the Americas have been gathering at the gates of Ft. Benning since 1990, and as our demonstration against the SOA has evolved into one of the most vibrant anti-militarization convergences in the United States, we continue to learn from one another's stories, tactics, ideas, information, theater, friendships, trainings, workshops, films, and more, click here to see the schedule of events!
Bertha Oliva, the founder and coordinator of the Committee of Relatives of the Disappeared (COFADEH) will travel from Honduras to join the mobilization. Bernardo Vivas from the Cacraica Community for Self-Determination, Life, and Dignity is coming from Colombia to speak out at the gates of Fort Benning, Georgia and the Coalition of Immokalee Workers (CIW), a community-based worker organization whose members are largely Latino, Haitian, and Mayan Indian immigrants are traveling up from Florida. Celebrity entertainers such as the Indigo Girls and Rebel Diaz will attend as well.
For more information about the November Vigil, click here.
Posted by mollymew at 9:57 AM