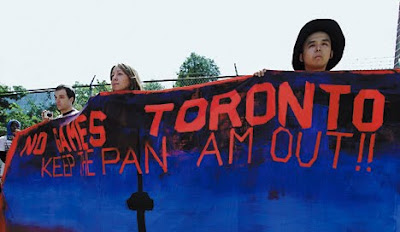 CANADIAN POLITICS-TORONTO:
NO PAN-AM EITHER:
The upcoming Vancouver/Whistler Winter Olympics and the resistance to it has been extensively reported here at Molly's Blog, often with material from the Olympic Resistance Network. This mega spectacle is not the only upcoming public trough where corporate hogs gather to suck up public money for no lasting benefit. In 2015 Toronto will be the host of the Pan-Am Games, and opposition to this funds flush is already developing. The following article from No Games Toronto (slightly dated) tells of the waste to come. Past comedies such as the 1976 Montréal and the 1999 Winnipeg Pan-Am Games give a foretaste of what is to come. As for the former the buildings were already starting to fall down or be knocked down long before the city finally paid off its massive debt load 30 years later. The latter only hit Winnipeg taxpayers with a slight debt, but the eminently foolish idea that anything could make Winnipeg, of all places, a tourist destination never panned out. This ain't the Costa del Sol baby. The whole matter is discussed quite thoroughly in THIS LINK from The Dominion newspaper. The original source is, of all places, the National Post. Wow, there's a Conservative out there who actually believes that government should be fiscally prudent rather than showering its corporate friends with so much cash that they need a front end loader to deliver. this guy better watch out that his "friends" in the party don't catch him in a dark alley some night.
But anyways, on to the story.
╝╝╝╝╝╝╝╝╝╝╝╝
Toronto Stuck with Pan Am Games – What’s In Store for Taxpayers?:
For immediate release: November 6, 2009
Toronto – Despite articulate community opposition, and a recent City TV poll where viewers overwhelmingly voted down the idea, the Pan American Sports Organization (PASO) made a decision today that Toronto will host the 2015 Pan American Games. No Games Toronto (NGT), a dedicated group of students and community members, has opposed the Games since May 2009 because the government’s $2.4 billion commitment to the Pan-Am bid, which comes with a blank cheque from the province for any cost overruns, does not consider the needs of Torontonians, especially during a recession. The money is going towards elaborate sport venues and other developments that ignore the immediate priorities of citizens including public swimming pools, community centres, day care facilities, affordable post secondary education and better health care.
“How can our government spend an exorbitant amount of our money on a one-time sporting event and then blame their funding cuts for desperately needed public services on the economic downturn?” asked Joeita Gupta, NGT spokesperson.
NGT has been raising awareness about the impact of mega-sporting events such as the Pan American Games through a flying squad bus during PASO’s visit to Toronto and numerous pickets and rallies. The University of Toronto has plans to build three Olympic-sized sports facilities, costing over $220 million to taxpayers and students and has significantly increased tuition fees.
“Resistance to these Games will grow and continue over the time leading up to and during the event,” stated Murphy Browne, also a spokesperson for NGT.
The government is not spending taxpayers’ dollars wisely in the interests of its citizens. We need a stable economic plan and mega-sporting events result in debt, not profit. Both Montreal and Winnipeg were left with enormous debts since hosting the Olympics and Pan Am Games respectively. Promises of jobs, infrastructure, affordable housing and economic boosts are empty. The Vancouver 2010 Olympic Games have an estimated cost of $6 billion, up from an original estimate of $660 million and the commitment to build affordable housing is cancelled due to mismanagement of the athlete’s village construction.
No Games Toronto will continue its work. Toronto needs a deep investment in public services; not a gamble in a one-time mega sporting event.
The Association of Part-time Undergraduate Students will be hosting a forum titled, "Why Toronto Should Not Host the 2015 Pan American Games" on Friday November 20, from 3-5pm in the Waters Lounge at Woodsworth College, U of T. The talk will be a part of APUS' Free Education Week.
Posted by mollymew at 6:00 PM