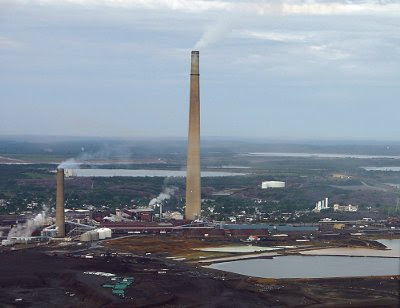 CANADIAN LABOUR-ONTARIO/NEWFOUNDLAND:
TWITTER FOR VALE INCO STRIKERS:
The strike against the multinational Vale Inco company continues in Ontario and Newfoundland, one that is surely due to enter the annals as one of the hardest fought contests in Canadian labour history. Keep up to date with the news via the strike support site Fair Deal Now. Meanwhile the online labour solidarity site Labour Start has launched a twitter based petition against the way that the company is handling (or not) negotiations. Go on over and sign up now. Here's the info from labour Start.
ßßßßßßßßßßßßßßß
First-ever global union Twitter petition campaign‏:
We need to turn up the heat on Vale Inco, the giant transnational mining corporation.
3,500 miners in Canada have been on strike since July and the company is not budging.
Over 6,200 of you have sent off protest messages -- and we need to keep growing that number.
But we also have to find new and innovative ways to deliver our message to the company.
It turns out that Vale Inco uses Twitter to recruit new staff. At the moment, they don't seem to be using it to recruit strike-breakers, but there's no reason why they won't.
If they can use Twitter to tell people how great it is to work for their company, we can use the same tool to tell them what we think.
LabourStart has today launched the first-ever global union Twitter petition campaign.
If you are a Twitter user, please click on the 'Sign and tweet' button on that page.
If not, please sign up to Twitter (it will take you only a few seconds) and then go to our petition.
Over 1,000 people sent off tweets in the last few days targeting the rabidly anti-union U.S. Chamber of Commerce. Which did not make the Chamber happy at all and provoked an angry response.
Let's see if we can wake up Vale Inco, and bring them back to the negotiating table.
Sign and tweet our campaign today.
Please forward this message on to your lists.
Thanks very much.
Eric Lee
Posted by mollymew at 4:46 PM