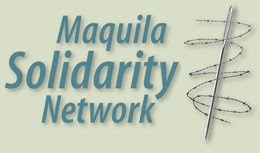 On November 14 an unprecedented agreement was struck between Russell Athletic and the union representing unjustly laid off workers at its former Jerzees de Honduras (JDH) factory.
Russell has agreed to open a new facility in the Choloma area, re-hire and provide substantial economic assistance to the 1,200 former JDH workers, institute a joint union-management training program on freedom of association and commit to a position of neutrality with respect to unionization, which will open the door for union representation at all of Fruit of the Loom's Honduran facilities (Russell Athletic is owned by Fruit of the Loom).
"This agreement represents one of the most significant advances for fundamental workplace rights in the twenty-year history of apparel industry codes of conduct," said Scott Nova of the Worker Rights Consortium (WRC), which conducted independent investigations into violations of freedom of association at JDH. "It is hard to overstate the significance of this breakthrough."
"For Honduran workers this agreement represents real hope, especially in the midst of an unemployment crisis in our country," said Evangelina Argueta, Coordinator of the Honduran General Workers' Confederation (CGT) in Choloma, which spearheaded the fight for the former JDH workers. "The fired workers haven't had income to support their families. Now they can be assured that they will have a job - this is the most valuable thing to come out of the agreement."
Russell Athletic was under serious pressure to repair the damage caused by its decision to close the JDH factory last January, which was widely condemned as an attempt to destroy a newly formed union (see last issue of the Update for details).
At the urging of students, unions and labour rights organizations, including United Students Against Sweatshops and MSN, over 100 universities in Canada and the US that have adopted ethical purchasing policies either withdrew their licensing agreements with the company or threatened to do so unless it took action to remedy the violations. Retailers and other Russell consumers were also approached.
"This is the first time we know of where a factory that was shut down to eliminate a union was later re-opened after a worker-activist campaign. This is also the first company-wide neutrality agreement in the history of the Central America apparel export industry – and it has been entered into by the largest private employer in Honduras, the largest exporter of t-shirts to the US market in the world. This is a breakthrough of enormous significance for the right to organize – and worker rights in general – in one of the harshest labor rights environments in the world,” said Rod Palmquist, USAS International Campaign Coordinator.
Talks between the union and the company finally began after Russell Athletic's membership in the Fair Labor Association (FLA) was put on "Special Review" status last June. An FLA investigation carried out in response to a complaint filed by the CGT, the Clean Clothes Campaign and MSN confirmed the WRC's finding that the presence of the union was a significant factor in the FLA member company's decision to close the JDH factory.
The FLA told the company it had to negotiate remediation with the factory union (SITRAJERZEESH) and the CGT, and engage with MSN and the WRC.
Fruit of the Loom is the largest private sector employer in Honduras, owning eight factories that employ over 10,000 workers, making the impact of this agreement extremely significant.
"The partnership being created between a large private employer and an independent union federation is unprecedented in the history of the apparel sector in Honduras and in Central America," said Nova.
Implementation of the agreement will be monitored by a joint union-management committee, with an agreement to enter into binding arbitration in the case of disputes over implementation or interpretation.
"We feel that the company acted in good faith during the negotiations, and this has to be recognized," said Argueta. "Relations between workers, the union and the company have been strengthened, and this will be reflected when the new factory is opened."
"All the support we received from groups like the WRC, MSN and from all of the university students was fundamental and we are very grateful," said Argueta. "The support of international organizations is very important."
• Read the Joint Public Statement on the agreement by the union and the company (November 17, 2009)
• Read more on the Jerzees de Honduras Campaign.
L^L^L^L^L^L^L^
The Maquila Solidarity Network is a great source of international labour news. Molly highly recommends that her readers sign up to get their news and participate in their campaigns. Here's the blurb about their latest newsletter, with lots more on the evolving situation in Honduras.
L^L^L^L^L^L^L^
Maquila Solidarity Update 14.3 (December 2009):
The December 2009 edition of MSN's newsletter, Maquila Solidarity Update, is now available on MSN's website. In this edition MSN examines how the coup in Honduras has given life to a popular movement, the historic agreement for Jerzees de Honduras workers, the launch of the innovative Asia Floor Wage Campaign, Mexico's policy of busting independent unions while letting fraudulent unions multiply and other stories.
» Download Maquila Solidarity Update 14.3
Posted by mollymew at 9:03 PM