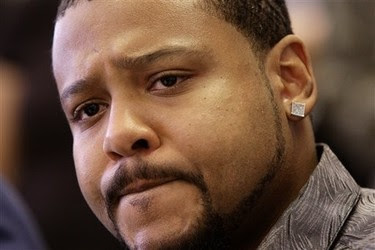 ANTI-MILITARISM CANADA:
HELP RODNEY WATSON:
The struggle against militarism is worldwide. Many other animal species "wage war" despite the illusions of some primitivists. The human situation, however, is unique because of our ability (inevitable!!! for those who who imagine that simply eliminating a technology by some miraculous universal religious renunciation) to form "coalitions"
will prevent war. Of course it won't ! The ability to prevent war in the future will require a very hard look at human nature, a hard look that my own "nutty comrades" of the primitivist strain obviously think is unnecessary. All that, of course, is irrelevant to our present situation where the actions of an anarchist movement are tiny to say the least. The dream world of parts of the American anarchist movement (I can only hope that the majority in a "country" that is better described as a "continent" have more common sense) is irrelevant to any political issue whatsoever. At its crudest, "if some idiot living in the" luxury" of a technological city wants to use the internet to propagandize for "the end of civilization" then "hypocrisy" is the least of the sins that can be attributed to such an idiot. The following is an internet appeal from the War Resister's International for solidarity with Rodney, who has claimed sancuaryin a Vancouver Church.
The following is a very special appeal for an American of conscience who has claimed sanctuary in a Canadian Church. I urge not just my Canadian comrades to support him. That much is obvious. I also urge our American comrades to do the best they can for this "good man".YES, such a campaign is "very liberal", but it is not from the perspective of the individual involved. this guy has come up here to escape killing Innocent people out in Iraq and Afghanistan. I don't expect my general readers to believe in political rhetoric, either that of the average leftist or my nutty comrades. Or my own for that matter. All that I would ask is that you consider the following appeal for a man who does not want to be a murderer and support him. This is plain language. Here is the story and appeal.
CPCPCPCPCPCP
USA/CANADA: War resister Rodney Watson in church sanctuary in Canada
2009 US war resisters Rodney Watson decided to seek sanctuary in a church in Vancouver, Canada, rather than face deportation to the United States to face desertion charges. Rodney Watson, who is originally from Kansas City, Kansas, enlisted in the US Army in 2004 for a three-year contract with the intentions of becoming a cook since he wanted to serve the troops in a non-combat capacity.
I n 2005, he was deployed to Iraq just north of Mosul, where he was put in charge of searching vehicles and Iraqi civilians for explosives, contraband and weapons before they entered the base. He was also expected to “keep the peace” by monitoring Iraqi civilians who worked on the base and fire his weapon at Iraqi children who approached the perimeter.
After his first tour was over, Watson was informed that he was instead being Stop-Lossed as the Army intended to have him serve beyond the date of his contractual obligation with the military. On two-week leave, he decided not to return to his base at Fort Hood, Texas, and instead fled to Vancouver, B.C. in 2006, where he lives with his Canadian born partner and their infant son.
In a September 2009 press conference, Watson - who is African-American - described his experience in Iraq, “I witnessed racism and the physical abuse from soldiers towards the civilians. On one occasion, a soldier was beating an Iraqi civilian, calling him a sand-nigger and threw his Qur’an on the ground and spit on it. The man was unarmed and he was just looking for work on the base. He posed no type of threat. He was beaten because soldiers brought their personal racist hatred to Iraq.”
He has been living in refuge at the First United Church in Vancouver, B.C., since 18 September 2009. He was welcomed with open arms and publicly declared sanctuary on Monday. Sarah Bjorknas from the Vancouver arm of the WRSC notes that Watson was issued his deportation order before his case could be resolved through the courts.
Watson wishes to remain in Canada because of his objection to the Iraq War but his passion for his infant son remains the strongest pull.
At the press conference, Watson’s voice trembled, “I don’t want to be torn away from him. I want to be there for him during his first steps, every waking moment, I want to be there. And I know if I’m deported, it is to prison and I will not be able to see any of those moments for who knows how long, for God knows how long.” If convicted of desertion as a felony charge he will not be able to cross the border to visit his son.
War Resisters' International calls for letters of support to Rodney Watson:
Rodney Watsonc
c/o First United Church Mission
320 E Hastings St
Vancouver, BC V6A 1P4
Canada
War Resisters' International calls for letters of protest to Canadian Prime Minister Stephen Harper, demanding to halt the deportation of Rodney Watson and other war resisters to the United States
.Office of the Prime Minister
80 Wellington Street
Ottawa
K1A 0A2
Fax: +1-613-941-6900
A protest email can be sent at http://wri-irg.org/node/9046.
Andreas Speck
War Resisters' International
Posted by mollymew at 10:29 PM