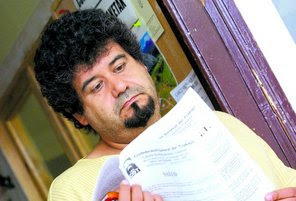 INTERNATIONAL LABOUR-SPAIN:
EX-SECRETARY GENERAL OF SPANISH CGT PASSES AWAY:
The following notice is originally from the Spanish Confederación General del Trabajo (CGT). The following is a translation from a French article at the A-Infos website. To my knowledge this is the first English translation of this notice on the web.
The CGT, of course, with about 60,000 members and receiving the votes of about 2 million workers in workplace representative elections in Spain, is the largest anarcho-syndicalist organization in the world by a far stretch. For a brief summary of what it is all about see the Wikipedia article on same. If you can read Spanish much more news on the life and work of Eladio Villanueva Saravia is available at the website of the CGT and their main journal Royo y Negro. Eladio contributed very much to this impressive rebirth of anarcho-syndicalism in its historic heartland. For an extensive list of CGT contacts visit Molly's still incomplete listings in our Links section.
Eladio was indeed a truly inspiring anarchist militant, not just in his union work but in many other fields. Tributes to him from across the world can be read at the CGT site. These are not just from other anarchosyndicalists but also from anarchists active in non-workplace struggles and unionists from countries other than Spain, unionists who do not share the anarcho-syndicalist label. It seems that he was a person who could inspire respect and affection across the lines of opinion.
What most impressed Molly was the unfortunately young age at which he died. From the Spanish sources I am given to understand that he was only 49 at the time of his death, and he could have contributed so much more in the years to come. A sad passing.
@@@@@@@@@@
Spain: Comrade Eladio, former secretary general of the CGT, has died:
Our dear friend, brother, friend, Eladio, a traveller of land, people and ideas, an indefatigable fighter for dreams of justice and freedom, a teacher of many without wanting to be, an apprentice to the breath of life, just a revolutionary ...
Brother Eladio , "The Egipcio",("The Gypsy" ?-Molly) "The Ciervo" ("The Stag-Molly ), we miss you already, orphans of presence, of your fine reflections of your precise words. Eladio friend, the CGT is your legacy ...
Tonight, in bed, having arrived from Zaragoza, at the Congress of the Union Federal union of Railway Workers), which he helped found, died Eladio Villanueva Saravia. He was Secretary General of the CGT between 2001 and 2007 ...
Antonio Carretero In: http://www.rojoynegro.info/2004/spip.php?article28594
PROFILE:
VILLANUEVA Saravia, ELADIO Valladolid, 1960.
He was active in libertarian youth groups that gave rise to the creation of the Young Libertarians of Castile and Leon Valladolid. In 1976-1977 he affiliated with the CNT. After the Fifth Congress he took part in the split of the CNT and was elected in 1980 as Secretary General of the Local Federation of Barcelona CNT-Congreso Valencia. He took part in all of the unification process which has resulted in the current CGT, he worked for the railroad (conductor and assistant switchman) obtaining influence for his union in the area. In 1987 he was Organizing Secretary of the CGT Cántabra and in 1989 he was chosen as Secretary General of the CGT of Cantabria. In 1991 he reached the Secretariat of the General Union of Railway Workers (SFF-CGT) and in 1994 and was appointed Secretary General of the Federation of Transport. At the 1997 Congress he was elected Union Action Secretary of the CGT, being elected to Congress in 2001 as Secretary General and reelected to that responsibility by the Congress in Valencia in 2005. A regular contributor to the Free Thought ( Pensamiento Libre-Molly, see our Links section ) magazine and the newspaper Red and Black (Rojo y Negro-Molly-ditto). In Parallel to his anarchosyndicalist activism he had actively participated in the social movements, ecology, collectives, antirepression, pro - political prisoners and socials, occupations/squats, free radio, fanzines ...
Posted by mollymew at 8:01 PM