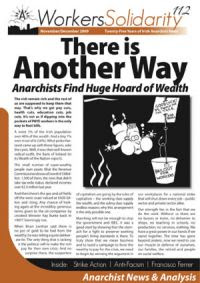 ANARCHIST PUBLICATIONS:
WORKERS' SOLIDARITY 112 NOW ONLINE:
Issue number 112 of 'Workers' Solidarity' the newspaper of the Irish Workers' Solidarity Movement is now available as a downloadable pdf file. See either their website or the link below. The WSM has carried out an amazing work of organizing and agitating in their own country, and they have also been a great inspiration to others of us in Canada and the USA. It's a great tribute to their hard work to see that their paper has continued for 112 issues. Most anarchist publications have the lifespan of a mayfly. Here's the promo from the Anarkismo anarchist news site.
♥♥♥♥♥♥♥♥♥♥♥♥♥
Workers Solidarity 112 is online:
The November - December 2009 Edition of the Workers Solidarity freesheet is now online. This is the 112th issue of Ireland's anarchist paper for you to read online, download a PDF of or distribute. 10,000 copies of the print edition are produced.