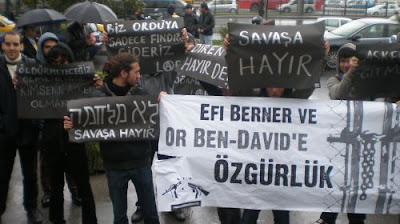 ANTI-MILITARISM-TURKEY/ISRAEL:
TURKISH DEMONSTRATION IN SUPPORT OF ISRAELI WAR RESISTERS:
Over the years many brave Israeli citizens have refused compulsory military service in their country's continued aggression against their Palestinian neighbours. Two recent ones, now prisoners of conscience, are Efi Brenner and Or Ben-David. The country of Turkey also has compulsory military service, and its troops are often used in equally brutal campaigns against that country's Kurdish minority. As in Israel many Turks have refused military service and been imprisoned for it. Anti-militarists in both countries see their struggle as a common one. Here, from the A-Infos website is the story of a recent demonstration in Istanbul in support of their Israeli fellow resisters.
A few notes on sources. The Israeli anarchist group, from which one of the resisters comes from is the Anarchists Against the Wall. The War Resisters International and the War Resisters Turkey (website in Turkish) also supported the protest. Note the prominent role played by anarchists in the protest. Turkey has a vibrant and growing anarchist movement, very much unknown in the outside world because of the large language barrier.
AMAMAMAMAM
Turkey- Istanbul: Freedom for Efi Brenner and Or Ben-David!:
On 30 October a group of Turkish antimilitarists gathered at the front door of Israel Consulate of Istanbul and declared their support to two Israeli conscientious objectors, Efi Brenner and Or Ben-David* who arrested last week for to object war politics of Israeli governments against Palestinian people. -- In the meeting that realized for the invitation of WRI (War Resisters’ International) a Turkish antimilitarist, Özgür Bircan also declared his conscientious objection. The members of LAF (Anarchist Activity Lycee), high school students same as Efi and Or, attended the meeting with the placards written “Reject! Resist! Refuse!” and “Do not go for service, do not shed your brothers’ blood”. ---- After reading the declaration of Shministim, Turkish antimilitarists said these briefly:
"We, the Turkish antimilitarists, with the invitation of WRI, gathered today to protest Israeli government and give our support to Israeli conscientious objectors Efi Brenner and Or Ben-David. As you know UN accused Israeli government and Hamas committing war crime at Gaza recently. Israeli conscientious objectors do not want to participate this crime. Wars are meant to be destruction for both humanity and nature and therefore we call all human beings not to go for military service and not to participate this crime.
Besides we want to conduct our support to all conscientious objectors arrested or suppressed for refusing to go for military service because of their political, moral or religious beliefs. We want Azerbaijani objectors Mushfiq Mammedov, Sakhetmurad Annamamedov who declared will not go for military service because they are Jehovah’s Witnesses, four Turkmenistanian objectors, South Korean objector Jungmin Oh and Belarusian objector Dzmitry Smyk released.
Özgür Bircan, who declared his conscientious objection in the meeting, said these briefly:
I, Özgür Bircan, object wearing uniforms; taking and giving orders; to be obliged to ‘learn’ using arms; applying this ‘knowledge’ if required, on people whom I did not know and see before; and to be part of one of the ideal citizen formatting institutions of yours.
Blood thirsty masters of this world, we are expecting you to the front lines of wars. We, the conscientious young people of the world will not be the participants of your bloody wars, power struggles, we object wars and militarism. I object wars and militarism.
If we need to create heroes for ourselves, my heroes are these two teenagers who met confinement at their early ages since they refuse to be part of that ferocity in Palestine. They are the saints of modern world. Our hearts are with Efi, Or and the whole people objecting to participating in wars.
=====================================
* Of the Anarchists Against the Wall initiative
Posted by mollymew at 10:06 PM