BLOGGING:
MEANWHILE ELSEWHERE IN THE BLOGOSPHERE...:
I figured I'd alert my dearly devoted fan(s?) to other neat new developments out there in Blogland. First of all Larry Gambone who has been writing great common sense anarchism for several decades now is busy moving his writings that were stored on the recently deceased Geocities site (cue funeral music) over to other places. Check out the process at the Porkupine Blog. Also Larry's recent collection of aphorisms. 'Rules to Rebel By' perhaps ?
@@@@@@@@@@ 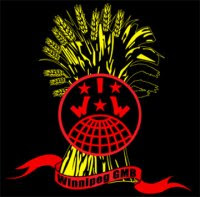 Also (cue drum roll please), here in Winnipeg, the throbbing, pulsating centre of the universe (whatyamean 'world class', we go for 'galactic class'), the Winnipeg Wobbly Blog has been running a series on 'Labour's November Martyrs'. Long before one section of our rulers sent young men to kill others in 1914 and the 'other side' did ditto, all over a dispute about who exactly gets to beat black and brown people over the back with a stick, November 11 was remembered in labour circles as the execution date of the Haymarket Martyrs. These were four innocent anarchist labour activists who were framed and killed on November 11 during the struggle for the 8 hour day. Their remembrance led to what is now known as 'Mayday'. Many others laid down their lives during this sad month as well. Read all about at the Winnipeg Wobbly Blog.
@@@@@@@@@@

Finally, last but not least, the good folks down Ontario way at the Common Cause/Linchpin site have a new feature on their website (cue marching band music). Linchpin News is an online Twitter based newsfeed bringing the news of the class struggle fresh daily to your inbox. This one actually has great potential. There are other anarchist news sites, some of them with more sense than others, but none of them are Canadian. We need this up here in the frozen north. Another thing that I see about this new bouncing baby boy is that it extends its area of interest outside of the "anarchist movement" (with all its virtues and vices) and reports on the 'class struggle' (in the widest sense), not only when it has the big black 'A' tag on it. In the end anarchism will probably always remain the creed of a small minority, but the most important thing is whether a majority of the people begin to act in a libertarian way in practical actions to solve their problems. Check it out either at Twitter (follow it there) or at the Linchpin website. Tell 'em Molly sent you.
@@@@@@@@@@
Finally a word from out sponsor (cue Mr. Clean Commercial music). Nominations for the annual Canadian Blog Awards are now closed, and, like last year, it seems that Mol

ly has been nominated in the category of "Best Political Blog". Voting will begin on November 29. Last year Molly made it into the top 5 finalists, but (weep, wail, moan, whimper) came in last of the five. This year I hope to do better. So here's the deal. When voting opens go over to the Blog Awards site and vote for Molly. You'd better do this or.... I'm going to give you the longest, most boring political lecture that has ever been given in human history. I mean it. Think I can't do it ? Just watch me. When I get going they could put that miserable sneaky prison maker Fidel, along with his slimy little brother Raoul and throw in that cheap Mussolini imitation the megalomaniac Chavez and when all three of the miserable old Stalinist coots had keeled over with massive pulmonary edema Molly would just be getting her second wind.
Wanna avoid a fate worse than death or Sarah Palin as President ? Vote for Molly. There's no other choice. Why settle for the best when you can get the bestest best.
Posted by mollymew at 8:07 PM