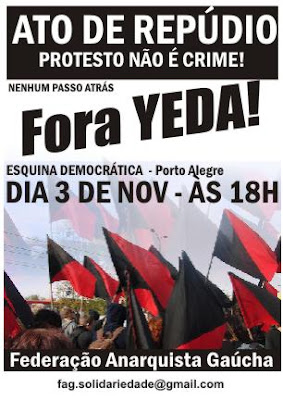 INTERNATIONAL ANARCHIST MOVEMENT-BRAZIL:
PROTEST POLICE ATTACK ON THE GAÚCHA ANARCHIST FEDERATION:
Last Thursday, October 29, police in the southern Brazilian city of Porto Alegre broke into the headquarters of the local anarchist federation, the Federação Anarquista Gaúcha (FAG) (Gaucha Anarchist Federation), making arrests and stealing various items of the property of the FAG. The following item from the Anarkismo website is the response of various international anarchist groups to these raids, and is hopefully the beginning of an international solidarity campaign. If you can read Portguese stay tuned to the FAG website linked above for further develeopments.
@@@@@@@
International anarchist statement:
Solidarity with the Federação Anarquista Gaúcha:
Yesterday, Thursday 29th October, the Civil Police of Rio Grande do Sul, under the command of Governor Yeda Crusius, broke into the premises of the Federação Anarquista Gaúcha. Police seized various materials such as posters, minutes of meetings, the hard disk of a computer and also the contents of refuse containers that were at the headquarters. They also tried to intimidate those who came to show their solidarity and names contained in the records of the organization's website. Two comrades were arrested and charged.
The comrades of the FAG have spent years fighting against exclusion and casualisation, defending justice and decent living conditions. They are well known for their work with the "catadores" (collectors of cardboard and recyclable refuse), with the homeless and with the landless. In short, work they have been carrying on for years with those at the bottom of society.
This is the reason why the police of the State of Rio Grande do Sul is repressing the comrades of the FAG, a State immersed in corruption scandals, which takes a repressive stance against collectives and organizations that freely exercise their freedom of speech in order to criticize various anti-people policies of the government. This is the government's response to social protest. And the FAG is not the first to be attacked - we must remember the murder of the landless peasant Elton Brum or the death of Marcelo Cavalcante last February.
We condemn these acts of repression in the strongest terms. We denounce the incongruity of Brazilian government policy, a policy of the right with left-wing words. A policy that is governed by the economic parameters dictated by the multinationals and therefore their militaristic, repressive tactics.
Not only do we reject this government repression, but we also express our solidarity and support for the comrades of the FAG, for the constant and tenacious work they do with the ordinary people of their city, which the government and police authorities are seeking to silence by terror, intimidation and repression. We are sure they will not succeed.
It is important now to show support and solidarity. For this reason, we appeal to all anarchist, libertarian and grassroots organizations and collectives to protest against this attack.
Federazione dei Comunisti Anarchici (Italy)
Zabalaza Anarchist Communist Front (South Africa)
Alternative Libertaire (France)
Melbourne Anarchist Communist Group (Australia)
30 October 2009
This statement is based on the one issued by the Confederación General del Trabajo
@@@@@@@
As has been mentioned above this statement is based on one from the Spanish CGT(Confederación General del Trabajo) which happens to be the largest anarchosyndicalist organization in the world (by perhaps two or three orders of magnitude). The CGT was "first off the mark" on this matter, and Molly reproduces her own translation of the CGT statement below. For a more complete and perhaps continuing coverage of this issue refer to the CGT's press organ Rojo Y Negro. As an aside Molly has to mention that she is still in the slow process of adding all the CGT's contact info to her Links section. I was "warned" about what a task this would be by Larry Gambone of the Porkupine Blog, and what he warned me about is very much true. Every time I think that I am nearing the end of these listings I discover yet another layer of complexity to the CGT. This, I guess, is not unexpected from an union federation that can gain the votes of about 2 million people in a country (Spain) that has only slightly more people than Canada. What I see the CGT as being is the prime example (the CNT-F is the secondary one) of how to make the ideals of anarchism relevant to a modern society. I also have to admit that my project of listing the CGT allows me to put other matters in better perspective. There is little doubt that there are more "groups" (ranging from 3 to 3,000 people) in the CGT than there are "individuals" adhering at least in their best mindless fashion to certain trends in anarchism that I find repulsive in the whole fucking world. It puts a hopeful light on things, that anarchism has not degenerated into a plaything of religious cultists without God, that anarchism can actually appeal to ordinary people who have ordinary interests and needs.

Gaucha should not translate as left. It's in reference to the gaucho, a typical figure of the region the FAG organise in. Kind of like if a prairie anarchist group would name itself the Redneck Anarchist Federation or something.

Thanks for the edit Nicolas. I thought that I had properly proofread the final effort before posting, but there was the mistake in the title. One more oops in Molly's many lines of oopses.